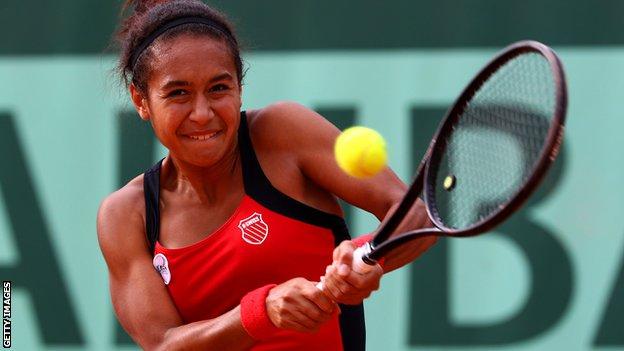 British number three Heather Watson and world number 126 Laura Robson both advanced to the second round of French Open qualifying on Wednesday.

Watson's 6-1 6-2 win over Canada's Sharon Fichman sets up a meeting with Tunisia's Ons Jabeur on Thursday.

Jamie Baker lost 6-4 6-3 to Spain's Daniel Munoz-De La Nava in round two to follow James Ward, Josh Goodall and Naomi Broady in being knocked out.

Guernsey's Watson, 20, is aiming to make the main draw at Roland Garros for the second successive year.

In 2011 Watson to become the first British woman to win a main draw match at Roland Garros since 1994.

Ranked 109th in the world, Watson needs a strong performance in Paris to come into contention for Olympic qualification.

Robson, meanwhile, is seeking to make the main draw at a fourth successive Grand Slam having been given a wildcard at Wimbledon and come through qualifying at both the US Open and the Australian Open.

Broady, ranked 195 in the world, was beaten in the first round, going down 6-0 6-1 to Sesil Karatantcheva of Kazakhstan.