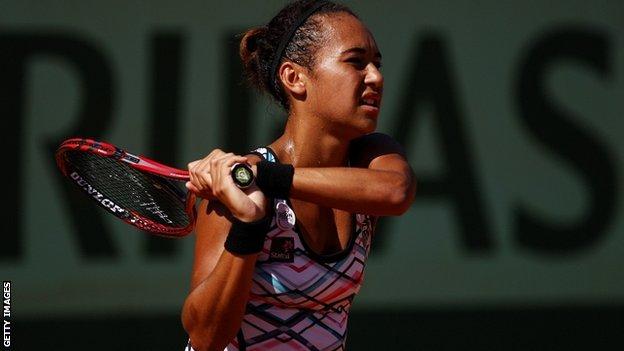 Heather Watson made it into the French Open but fellow Briton Laura Robson missed out in final qualifying.

Robson, 18, was serving for the match at 5-3 in the second set but saw her French Open debut disappear as Pliskova clawed her way back.

The British number three, ranked 109, will hope to match that run to protect her ranking and hopes of qualifying directly for the Olympics.

The world's top 56 players will make London 2012's main draw automatically, but with a proviso that there can be no more than four from one nation, the cut-off is likely to fall around the 70th ranking slot.

Watson, who beat Tunisia's Ons Jabeur 7-6 (7-5) 6-3 in the previous qualifying round, will meet Russia's Elena Vesnina in round one at Roland Garros.

Twelve months ago, the Briton beat Frenchwoman Stephanie Foretz Gacon in the first round of the main draw, before slipping to defeat by Kaia Kanepi, then the world number 16.

"I love Paris and I love playing on the clay, it is perfect for me," said Watson, who last year became the first British woman for 28 years to qualify for the French Open.

"These past few days have been good, I have been on form, playing very well in practice and I just want to take that into the matches. I have done.

"This morning I wasn't feeling my best, feeling a bit nervous about getting through, but I ended up playing one of the best matches I could have played."

Robson, who beat France's Laura Thorpe 7-5 7-6 (7-5) in the second round of qualifying, had two match points at 40-15 but tightened up and could not convert either as Pliskova went on to win four games in a row.

The Briton, who lost to 20-year-old Pliskova in the girls' final at the Australian Open in 2010, hung on until the 10th game of the third set, when her Czech rival won the third of three match points after a netted forehand from Robson.

The British number four had won eight qualifying matches in a row at Grand Slams, making the main draw at the US Open and Australian Open.

Elena Baltacha, Anne Keothavong and Watson will represent Britain in round one for the second successive year.