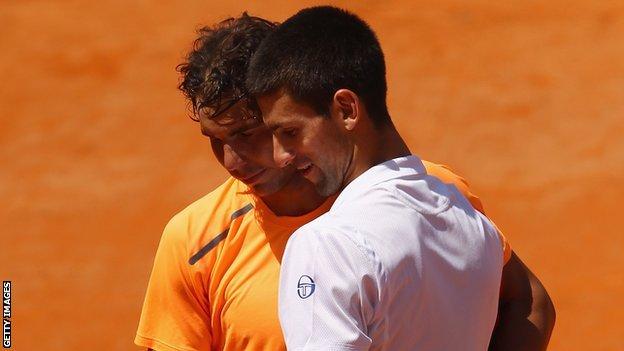 The amount at stake at the French Open makes it the biggest Grand Slam of the year, according to former Roland Garros finalist Robin Soderling.

Success in Paris would see Novak Djokovic hold all four majors, while Rafael Nadal is chasing a record seventh title.

"Djokovic has so much to play for, but there is also Nadal," Soderling told BBC Sport.

It's hard to look beyond the big three. Or even perhaps the big two. It's an amazing time at the top of men's tennis and as Djokovic goes for an incredible four majors in a row, Nadal tries to stop him like he did so emphatically on the clay of Monte Carlo and Rome.

Federer will want to prove a point - he looked in great shape in Madrid - and he feels, at the start of this hectic summer, that someone else could be about to gatecrash the big league.

Could it be Murray? Maybe, although he's short on matches. Del Potro? Tsonga? Form suggests Tomas Berdych, in excellent nick, is perhaps someone to watch this fortnight.

"The French Open is the biggest Grand Slam of them all this year."

World number one Djokovic has beaten Nadal in the last three Grand Slam finals, with his last defeat in a major coming at Roland Garros in 2011 when he fell in the semi-finals to Roger Federer, who went on to lose the final to Nadal.

Since being defeated by Djokovic in the Australian Open final, Nadal has met the Serb twice, winning on the clay courts of Monte Carlo and Rome.

Soderling, who in 2009 became the only man to ever beat Nadal at the French Open, added: "It's always tough to stop Nadal in Paris.

"He has been the favourite for many years and the same this year, but it's going to be tough. There are a lot of good players in great form right now."

Sixteen-time Grand Slam winner Federer arrives in Paris after winning on the blue clay of the Madrid Open, and reaching the semi-finals of the Italian Open, where he was beaten by Djokovic.

However, while the top three men have all shown some form ahead of the second Grand Slam of the year, world number four Andy Murray has not passed the quarter-finals of the three clay court tournaments he has played in 2012.

"There are a lot of guys who have the game to win a Grand Slam but these tournaments are very different from the rest - the biggest thing is that you need to stay consistent for two weeks in the best-of-five set matches," continued Sweden's Soderling, who has not played since July of last year because of illness.

"The top three guys are really consistent, they rarely produce any bad matches.

"Andy is a great player and has the game to win a Grand Slam. I'm sure he will do it one day but you need to play well for seven matches, best of five sets, and it's not very easy."

Three-time French Open winner Gustavo Kuerten agrees that Murray has the ability to win a Grand Slam, but believes it is Djokovic who is most likely to stop Nadal.

"Murray is a tennis player who has potential to win a Grand Slam," said the Brazilian.

"However, Nadal is without doubt the best player on clay. He has a lot of strategies, which explains his success.

"To defeat Nadal it's not necessary to be aggressive all the time. You have to make him risk more.

"Djokovic found a way to make Nadal feel uncomfortable on the court. This is the secret to beating him."