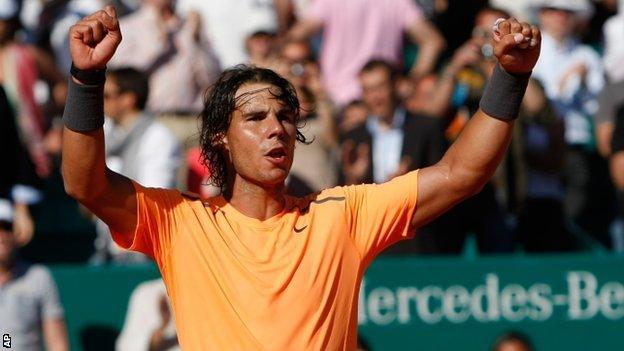 Novak Djokovic admits Rafael Nadal is the favourite for the French Open - but is up for the challenge of completing a historic Grand Slam sweep in Paris.

The world number one is bidding to be the first man since Rod Laver in 1969 to hold all four major trophies.

But reigning champion Nadal is going for an unprecedented seventh title.

"He is always favourite here," said Djokovic. "This is an opportunity very few tennis players will get. I'm aware of that but accept it as a challenge."

Only Laver, twice, and Don Budge in 1938 have held all four major titles at the same time, both having completed the Grand Slam of all four in a single year.

The Serb, who already has the Wimbledon,US Open and Australian Open crowns in his possession and plays Italy's Potito Starace in the first round, added: "It makes me even more motivated.

"It makes me feel good about it, rather than feeling pressured and worried if something bad is going to happen. So I'm looking forward to that."

Third seed Roger Federer, who begins his challenge against Germany's Tobias Kamke, believes it is Nadal who will be making history at Roland Garros, rather than Djokovic.

"Rafa is the favourite for me," said Federer, the 2009 champion in Paris. "I think he has lost only two sets between Rome, Monte Carlo and Barcelona, so that's a pretty good start.

"Then he's playing for his seventh title, so no discussion. I know how incredible he can be here in Roland Garros. For me it would be Rafa, Novak, and me in third position."

Since Laver's 1969 achievement, only Pete Sampras, Federer and Nadal have had opportunities to complete a non-calendar year Grand Slam.

The Spaniard, who starts his defence against Italy's Simone Bolelli, said: "Every tournament is difficult but this one is not going to be more difficult because he [Djokovic] has already won three.

"When I went to Australia in 2011 with the chance to win four in a row, I felt zero extra pressure."

As for going one better than Bjorn Borg, with whom he currently shares the record in Paris, the second seed added: "I don't want to be more motivated because I am going for a seventh - it is always the same."

British number one Andy Murray, seeded fourth, insists he will take confidence from reaching the semi-finals last year, where he eventually succumbed to Nadal.

Murray, who faces Japan's Tatsuma Ito in round one in Paris, said: "I feel like to have a good run here I'll need to play good tennis, obviously. But last year definitely helped, because I also wasn't 100% healthy during the event last year.

"Providing I don't have any injuries like that and I play some good tennis, there's no reason why I can't have another great tournament."