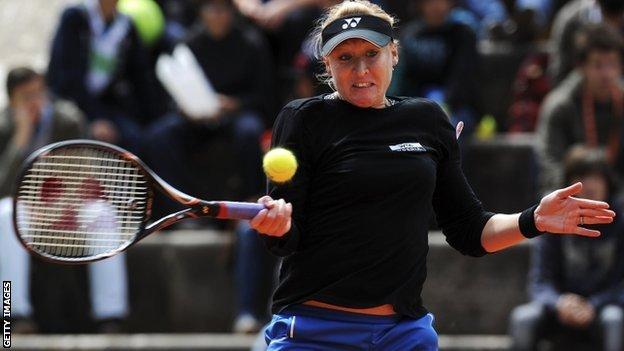 Elena Baltacha admits she faces a daunting test against Australia's Samantha Stosur in Sunday's French Open first round, but insists she can cause an upset.

The world number 67 meets the reigning US Open champion and 2010 Roland Garros finalist in the Grand Slam's opening contest on Court Philippe Chatrier.

"I have massive respect for Sam but I believe I have a chance against her."

BBC Sport columnist Baltacha, one of three British women in the main draw alongside Heather Watson and Anne Keothavong, has won only five tour matches this year.

She added: "It will be a big match on a show court and I usually play well in those situations, and I'll always fight for every ball.

"It's going to take one hell of a match from me but I've beaten top players before and I know what I'm capable of. I'm looking forward to it."

Venus Williams, the 2002 champion, brings a close to the day's play against Paula Ormaechea of Argentina.

Former Roland Garros winners Juan Carlos Ferrero of Spain and Serb Ana Ivanovic, as well as former US Open champion Andy Roddick, are among those in action on Court Suzanne Lenglen.

The remaining first-round ties will be played on Monday and Tuesday, with Andy Murray up against Japanese world number 69 Tatsuma Ito.

Baltacha's match will be streamed live on the BBC Sport website.