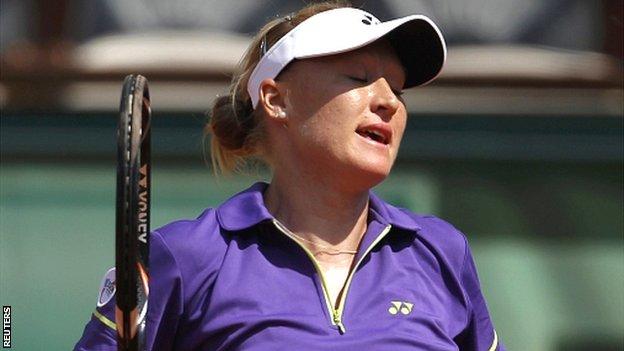 Elena Baltacha is out of the French Open after suffering a straight-sets defeat by US Open champion Samantha Stosur on day one at Roland Garros.

The British number one fought well in the first set but was outclassed in the second, with sixth seed Stosur winning 6-4 6-0 in just over an hour.

Baltacha, who made round two in 2011, was the first player eliminated.

But the campaign is over for Baltacha and the world number 68's ranking will drop ahead of the Olympic cut-off on 11 June.

"To be honest, it was not the draw I wanted - she is one of the best players in the world on clay, it was a big ask," said the Scot.

"She played very well. I managed to get back at 5-4. It would have been interesting to see if I had made it 5-5.

"In the second set she went two levels up and that was it. She was too good. It was a good lesson for me today."

Baltacha started nervously, failing to land a single first serve as her opponent broke to 15 in game two for a 2-0 lead.

A winning lob helped her to an immediate break-back point, but Stosur served her way out of trouble and was soon 5-2 ahead.

Baltacha finally found some rhythm with a confident hold in game eight followed by three huge groundstrokes in game nine.

Stosur produced a double-fault on break point, but hit straight back to wrap up the opening set on Court Philippe Chatrier.

However, there was no such contest after the change of ends as Baltacha sliced a poor backhand into the net to fall 2-0 behind.

Although the match raced away from Baltacha in the second set, the competitive first opened the tournament in decent fashion with the Brit more than playing her part. She recovered from a break down with a superb ninth game, full of aggressive returns. Sadly that was the last game she won in the match with the ranking gap of 61 places brutally exposed by the end. Stosur demonstrated why she's a contender with her trademark kick serves and inside out forehands. It means Baltacha will have to rely on a wild card if she's to compete in the Olympics as she will be outside the cut-off when selection is made on 11 June.

A wayward forehand made it 3-0 and when the double-break arrived, Baltacha's fate was looking inevitable.

The Scot slipped to 0-40 in game six and despite saving two match points, her defeat was confirmed when Stosur drilled a forehand down the line.

"I gave everything I had and really enjoyed the experience," Baltacha added. "I'd never played on Chatrier before, it's an amazing court and it was a real privileged to play there.

"It would be absolutely amazing to do that again - hopefully against a player further down draw.

"I'll probably leave tonight and have a few days at home in Ipswich. Then I'll play Nottingham, Birmingham, Eastbourne and Wimbledon."