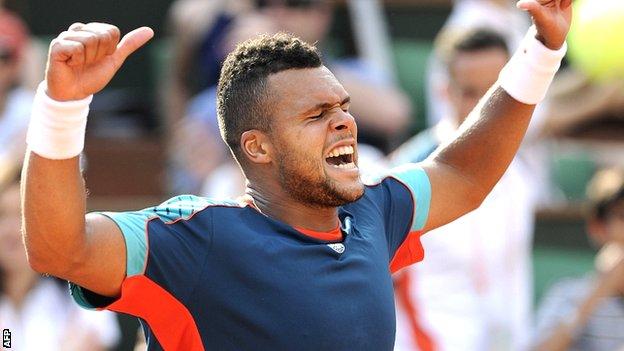 Kuznetsov threatened an upset, winning five games in a row to take the first set, but the Frenchman responded to avoid an upset.

I feel like I'm always shuffling or hopping or not stopping or something. My footwork on this stuff is really bad

"You can't fake it out here," said American Roddick. "I move horrendously out here. My first step is just so bad on this stuff.

"I feel like I'm always shuffling or hopping or not stopping or something. My footwork on this stuff is really bad.

"You know, there are a lot of guys who know how to play on clay, and it's just second nature to them. I feel that way on grass, so hopefully I can turn it around there."

Tsonga declared last week that no Frenchman could win Roland Garros this year but he ensured he remained in with a chance.

After losing the first set he bounced back and broke his opponent once in the second, an advantage which was enough to take it 6-3.

He continued to up his game and won the remaining sets to ensure a second-round meeting with German Cedrik-Marcel Stebe, who won through after his opponent Joao Souza was forced to pull out midway through the second set.

Del Potro, 23, overcame an injury scare in his first-round match. He required medical attention on his left knee after losing the second set, his opponent fighting back from 5-1 down in the tie-break to level.

The Argentine looked in discomfort during the third but he regrouped to progress to round two, where he will meet France's Edouard Roger-Vasselin.

But clay-court specialist Montanes recovered from a 4-2 deficit in the second, producing some deft shots on Court Philippe Chatrier.

Del Potro, a semi-finalist in 2009, needed heavy strapping on his left knee before embarking on the third set.

Although the powerful right-hander initially looked uncomfortable, he made quick work of completing a hard-fought victory.

Roddick has been injured for much of the year and Mahut, famous for his marathon 11-hour five-minute tussle with American John Isner at Wimbledon in 2010, served 13 aces past the former world number one to secure his place in the second round.