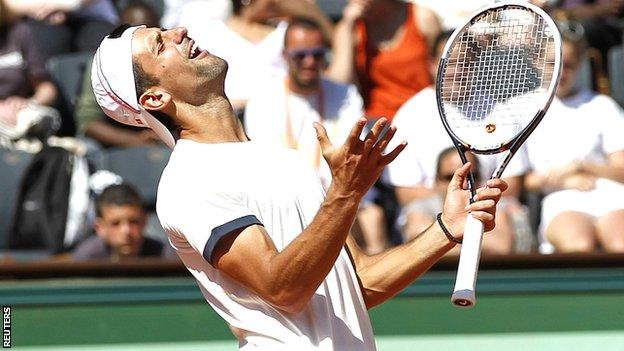 Novak Djokovic will start his bid for a maiden French Open title when he plays Potito Starace of Italy on Monday.

The world number one - aiming to become the first man since Rod Laver in 1969 to hold all four major trophies - is third up on Philippe Chatrier.

I believe I have the opportunity to make history this year, and do something that not many players have done in tennis. That gives me a lot of excitement about this tournament

Play on that court is opened by top seed Victoria Azarenka, who takes on Italy's Alberta Brianti at 10:00 BST.

Robson lost in the final round of qualifying but enters the draw as first alternate after Silvia Soler-Espinosa injured her ankle.

The 18-year-old faces Anabel Medina Garrigues at 10:00 BST and there will be radio commentary of that match on the BBC Sport website.

Robson is the only British player in action on day two, with Andy Murray, Anne Keothavong and Heather Watson beginning their campaigns on Tuesday.

The schedule is headlined by Djokovic, whose defeat by Federer in the semi-finals last year ended his 43-match winning run.

He returns to Roland Garros with the chance to achieve what no player has managed for 43 years.

"I believe I have the opportunity to make history this year, and do something that not many players have done in tennis," said the 25-year-old from Serbia.

"That gives me a lot of excitement about this tournament. It gives me more motivation to practice harder, prepare better and deliver my best game in these two weeks.

"It's my favourite out of the four Grand Slam, definitely. I feel very much at home here, very comfortable. It's Europe and I like Europe the most. I grew up here, I live in Europe.

"The venue is in the middle of Paris, one of the most beautiful cities in the world. There's a lot of people from different nations coming to support their players and it feels great."