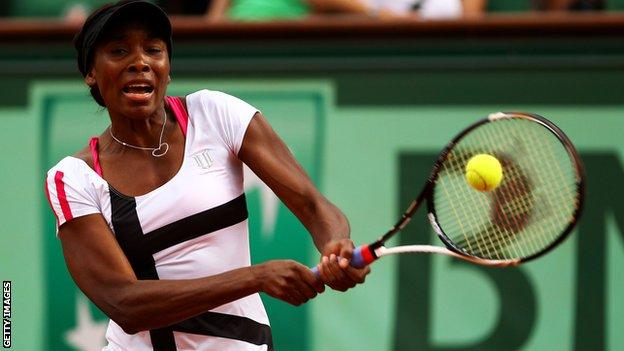 Former world number one Venus Williams battled to victory over Paula Ormaechea in round one of the French Open.

Williams, currently ranked 53rd in the world, won 4-6 6-1 6-3 and will next face either third seed Agnieszka Radwanska or Bojana Jovanovski.

Williams insisted that just being at the French Open was an achievement because she has been battling Sjogren's Syndrome, an energy-sapping illness.

She did not play from the 2011 US Open until returning to action in March, during which time her world ranking slipped to 134.

"It's a huge accomplishment just to be here. The biggest challenge was to learn how to live with it and that the key is to be here and to try my best right now," said the 31-year-old American.

"Sometimes I think is this all my fault. Did I do something wrong to cause it?

"My main goal is the Olympics. If I reach that then I will be home free - you might not see me again.

"I would love to play doubles here with [sister] Serena but my goal was to peak in singles for the Olympics. All of my energies are towards that."

Williams looked in big trouble as she dropped the first set against French Open debutant Ormaechea.

The seven-time Grand Slam champion made 17 unforced errors compared to just eight from her Argentine opponent.

But the second set told a different story as the American took control, hitting 13 winners to one from Ormaechea, ranked 120th.

Breaks were exchanged twice in the third set before unseeded Williams struck again to take a 4-3 lead.

She then held serve to move 5-3 up and Ormaechea struggled to cope with Williams's power and accuracy thereafter.

The 26-year-old won eight straight games to take the first set and lead 3-0 in the second before being was broken twice.

Kuznetsova hit straight back, though, and world number 117 Lucic showed little resistance in the closing stages.

Number 13 seed Ivanovic needed only 59 minutes to beat Spain's Arruabarrena-Vecino and secure her place in the second round.

The former world number one will now face Israeli Shahar Peer after she beat Stephanie Dubois 6-2 6-2.

Germany's Kerber has enjoyed an impressive year and that continued with her comfortable victory over Shuai.

The 24-year-old reached the semi-finals in Rome, rising to 10th in the world, and she looks capable of going far at Roland Garros.

She will meet Romina Oprandi or Olga Govortsova in the second round.