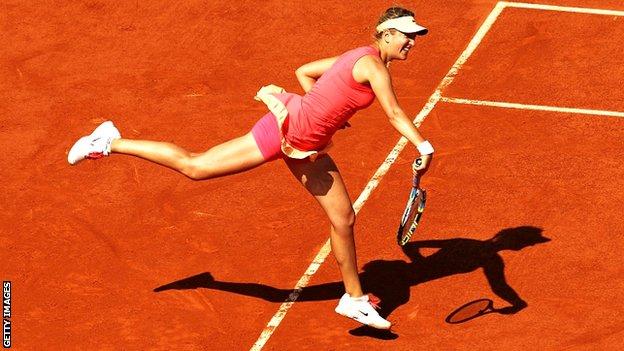 World number one Victoria Azarenka suffered a major scare in the French Open first round, taking three sets to get past Italian Alberta Brianti.

What an ugly match. After three torrid sets, Azarenka will feel exceedingly fortunate to have survived. If she plays like this she won't get anywhere near the title. However, she deserves credit for turning the match around from a seemingly lost position. At 4-0 down in the second set she hit a second serve ace, almost swinging in desperation, and won the next six games. She used the surprise tactic to her advantage and, even though form was still shaky in the decider, she did enough to scramble through.

"Bad days happen," said Azarenka. "Unfortunately today I had way more mistakes than I usually do, but it happens sometimes.

"First matches, they're not easy. But I still won. I managed to go through 60 mistakes and still win. I think that's pretty good statistics.

"Plus also I have to give her a lot of credit. She played really well, and she pushed me to dig deep today."

"You can sit and look for excuses. I try not to approach it that way. I just try to think what can I do better next time."

Azarenka, 22, will have to raise her level if she is going to pass the quarter-final stage at this event for the first time.

Seemingly over the shoulder injury that forced her out of the recent Italian Open, she comfortably picked up the first two games.

But Brianti, who had previously never even taken a set off a top-10 player in five defeats, rallied to take a 4-2 lead.

Azarenka fought off a set-point to make it 5-5 but she was always struggling in the tie-break and despite saving two more set-points, a 28th unforced error gave the unfancied Brianti a shock lead.

The Italian broke twice more at the start of the second set to surge 4-0 ahead but Azarenka saved break point to avoid going 5-0 down with a second-serve ace.

That proved the turning point and the Belarusian finally found some rhythm to haul herself level in the match.

Brianti broke in the opening game of the third set but Azarenka hit straight back and powered to an error-strewn victory.

Chinese seventh seed Li thrashed Romania's Sorana Cirstea 6-2 6-1 in 58 minutes and later said she was still smarting from her defeat by Maria Sharapova in the Italian Open final.

"The final in Rome still killing me," she commented. "After the final I told everyone 'don't talk to me about tennis for like three days'."

Li will face either Barbora Zahlavova Strycova of the Czech Republic or France's Stephanie Foretz Gacon in the second round.

Jankovic, seeded 19th, battled back from a poor start to beat Mayr-Achleitner 1-6 6-1 7-5 but Lisicki lost 6-4 6-3 to unseeded American Bethanie Mattek-Sands.