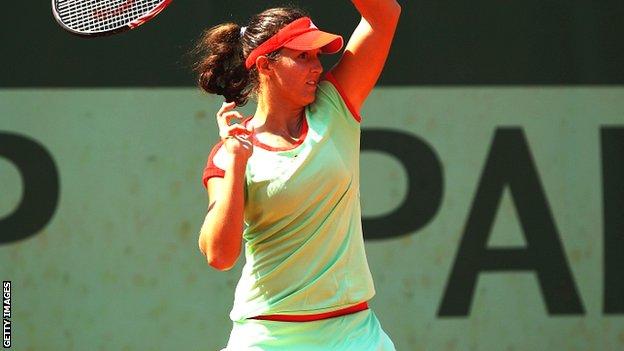 But her stay was short-lived as clay-specialist Medina Garrigues won 6-2 6-1 in an hour and 10 minutes.

The four Britons left in the event - Andy Murray, Anne Keothavong and Heather Watson - play their opening matches on Tuesday.

Robson follows in falling at the first hurdle after being outplayed by 29th seed Medina Garrigues.

"It was a really tough match against one of the most experienced clay-court players out there," she said. "She gives you no free points.

"I definitely played aggressive and had a lot of opportunities. I was disappointed I didn't take them at the end of the first set and the start of the second.

"I started making a few more errors in the second set. It was disappointing and I have lots to work on."

Making her Roland Garros main draw debut, the left-hander looked nervous early on and was broken to love in her first service game.

But she responded with an superb forehand winner to secure a love hold for 3-1 and engineered a break point in game five.

The first set scoreline was particularly harsh on Robson who, after a nervous start, stepped up the court and start going for her shots. Some of her winners, particularly off second serve returns, suggested a successful grass season lies ahead. She had chances to break back but Medina Garrigues, who has won more clay titles than any other active player, had way too much guile and consistency. The second set was more one sided but it's all part of the learning process for 18-year-old Robson.

Robson was stepping into the court and attacking her opponent, but Medina Garrigues held firm and saved another break point to go 5-2 up.

Two wayward groundstrokes from Robson gifted the Spaniard a 42-minute first set, and it was one-way traffic in the second.

A untimely double-fault and a routine forehand dumped into the net saw the Briton broken to love again for 2-0.

Medina Garrigues then fended off two break points before striking again when Robson netted a forehand in game four.

The 2008 Wimbledon girls' singles champion got her name on the scoreboard with a confident hold for 5-1, but she drilled a forehand long to confirm her defeat.

"I still have loads of things I can improve on, especially consistency on my first serve going into grass season," Robson added.

"I'm looking forward to the grass and getting some good results there. It's fairly obvious I'm not a natural on clay.

"I'm looking forward to getting on the grass playing some home tournaments."