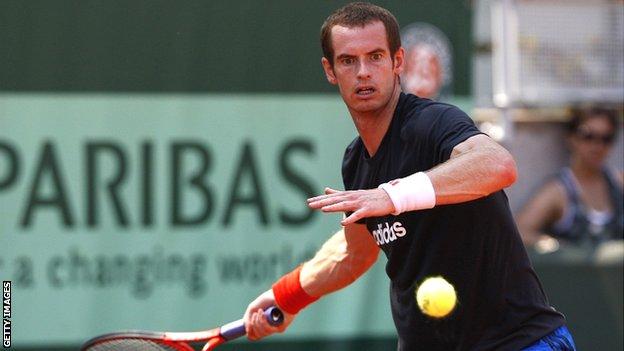 Britain's Andy Murray has dismissed concerns over his fitness ahead of Tuesday's meeting with Japan's Tatsuma Ito in the French Open first round.

Murray's encounter with the world number 68 is the fourth match on Court Suzanne Lenglen at around 16:00 BST.

The fourth seed has had a back problem since December but he told BBC Sport: "It's much better now, I'll be fine."

But the main focus for British fans is Murray, who resumes his search for a maiden Grand Slam title against Ito.

"The back is feeling much better now," said Murray, 25. "It was just something that had been niggling for a lot of the year and obviously the more you play on it, it's going to get a little bit worse each time.

"I needed to take a break and let it settle down a little bit, but it feels better now. This time last year I twisted my ankle after my third round match, I was on crutches and had an MRI scan.

"No matter how sore my back is, it's much better than how my ankle was at this stage last year and I managed to have a good run, so hopefully it will be the same case this year."

Murray fell to Nadal in the semi-finals 12 months ago and this clay season has seen him reach the last eight in Monte Carlo and Barcelona before he withdrew from Madrid and lost to Richard Gasquet in Rome.

Ito, 24, lost his only previous meeting with a top-10 opponent and has made it past the first round at a Grand Slam just once.

"I don't know that much about him," Murray commented. "I played doubles against him last year in Tokyo. He's quite a flat hitter of the ball but I don't know him that well.

"I played well in Monte Carlo, had a good tournament there. In Barcelona I had the problems with my back. In Rome I played two decent matches and was starting to get back into it a little bit.

"I just need to make sure I'm ready and what's happened in the last few weeks is not going to make a difference once the tournament starts."

Looking ahead to his Roland Garros debut, Ito said of Murray: "He's a great tennis player. I'll try to do my best, be aggressive on every point.

"I played against him once before, in doubles. He has a good serve and is difficult to break. It's exciting for me.

With and eliminated on days one and two, British female hopes rest with Keothavong and Watson.

British number two Keothavong, who beat 116th-ranked Hungarian Czink in Copenhagen in April, said: "It gives me a bit of confidence but that was completely different - it was indoors on a fast court.

"She can play and has been around for a while, had a couple of big results in her career and it will be difficult."

Watson lost her only previous meeting with Vesnina, on the Charleston clay in 2010, and said: "It was a good experience but I'm a different player now, more experienced and confident in my game.

"I've been working on my serve a lot recently with my coach, trying to make it more powerful and more of a weapon. I'm doing what he tells me and it's been working."