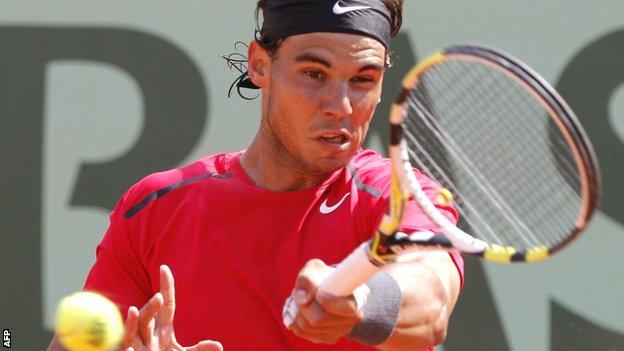 Rafael Nadal began his quest for a seventh French Open title with a 6-2 6-2 6-1 win over Italian Simone Bolelli.

Compatriot David Ferrer, the sixth seed who is scheduled to meet Nadal at the semi-final stage, began with a 6-3 6-4 6-1 win over Slovakian Lukas Lacko.

Nadal's next opponent will be Denis Istomin of Uzbekistan, who beat Igor Kunitsyn of Russia 6-2 6-1 6-2.

The Spaniard has now won 46 of his 47 matches at the French Open since his debut in 2005, his only defeat coming in the fourth round of the 2009 event to Robin Soderling.

Against Bolelli Nadal was barely tested, making only 18 unforced errors compared to his opponent's 38, and from 2-2 in the first set he won eight games in succession.

The highlight of the match for 26-year-old Bolelli, who has never progressed beyond the third round at a Grand Slam, was when he broke serve in the second set after Nadal double faulted.

Nadal then had to save a trio of break points to stop Bolelli closing the gap to 4-3, but the world number two moved two sets clear after an hour and 24 minutes on court.

He completed victory after winning eight out of nine games.

"All matches are always difficult - the more so here, as you are a bit more nervous," said Nadal, who is bidding to match Rod Laver and Bjorn Borg on 11 Grand Slam titles.

"It's not easy to get your bearings right off as the court is big and it's difficult out there. But I'm always happy to play here - it's an incredible feeling."