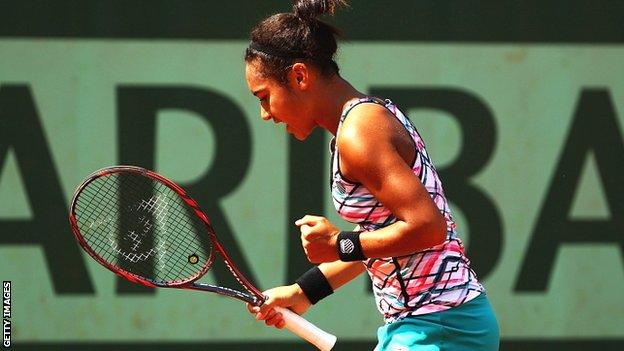 The 20-year-old world number 110, who won three qualifying matches to reach round one, won a fluctuating second set that contained five breaks of serve.

She sealed victory in an hour and 22 minutes and now faces Julia Goerges.

Keothavong, the world number 81, beat Czink on an indoor court at the Copenhagen Open in April, but was well below her best against the powerfully-built 29-year-old left-hander on Court Six.

Victory would have taken Keothavong above Elena Baltacha as British number one but she struggled with all departments of her game, losing the first set in 23 minutes and surrendering her serve again in the third game of the second.

The 28-year-old had only one break point, which she failed to take, and her frustration was increasingly evident as Czink wrapped up the match in an hour and three minutes.

With the exception of one poor game in the second set, for which she can surely be excused, this was an excellent performance from Watson. She served and returned superbly and moved around the clay court like a seasoned pro. A technical change to her service motion has given her more bite, especially on the first delivery on which she didn't lose a single point in a dominant first set. Her beaming smile, as she left the court, illuminated this little corner of western Paris. Back in "happy land".

Watson, still hoping to earn a place at the Olympics this summer, last year became the first British woman in 28 years to qualify for the main draw, and looked assured from the outset in the sunshine on Court Six.

She forced Vesnina, who reached the final of the WTA Tour event in Budapest last month, into successive errors to create the first break in game four, and a delightful top-spin lob landed on the baseline for 4-1.

Employing a new elevated elbow position in her service action, Watson lost only one point on serve in the first set, and a double-fault from Vesnina put the Briton in control, the set taken in 30 minutes.

Watson's delivery came under pressure in the second set and Vesnina sealed her first break in game three when her opponent fired wide.

But Watson, who did not drop a set in her three qualifying matches, displayed impressive speed to level at 2-2 with a sliding backhand pass and when Vesnina netted to lose serve again, it was 6-2 4-2.

The Russian was far from finished and reeled off some sweetly-hit forehands to level at 4-4.

However, Watson showed superb composure to capture a love hold in game nine before breaking again to book her place against 25th seed Goerges of Germany, who beat Lucie Hradecka 7-6 (7-1) 6-4.

"I've been playing very well in practice and thought to myself that I've got to bring this to matches because lots of people play great in practice and let the emotions get to them in matches," Watson said after her impressive victory.

"I was very relaxed, I remember last year I let the nerves get to me but I have grown as a player since then and am able to control it a lot better this year.

"I'm confident, I'm playing well, I've never played or practised against Julia, I know she's a hard hitter but I've got nothing to lose and I'm looking forward to it."