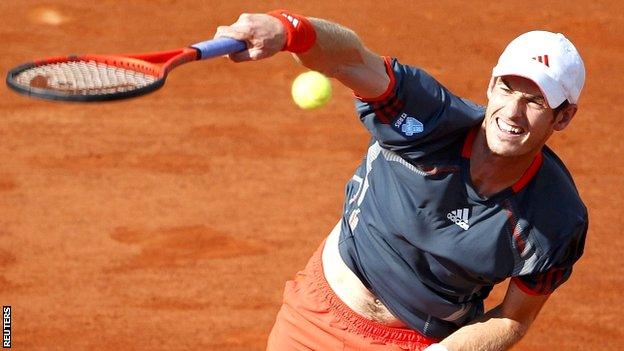 Britain's Andy Murray resumed his bid for a maiden Grand Slam title with a straight-sets victory over Tatsuma Ito in round one of the French Open.

Murray made a blistering start before overcoming a mid-match blip to win 6-1 7-5 6-0 in an hour and 35 minutes.

"It was good, I played one bad game on serve to let him back in but everything else was pretty good," said the Scot.

Murray next plays Jarkko Nieminen of Finland after his opponent Igor Andreev retired while trailing 3-6 6-2 2-1.

Fourth seed arrived Murray in Paris with concerns over a back injury but there was little sign of discomfort against Ito.

"My back is fine and hopefully it will keep getting better each day," added Murray.

"I'll make sure I do all the right things so that it feels as good as possible through the tournament."

The 25-year-old opened his campaign with three love holds and two breaks of serve to race 5-0 in front.

"The first and third sets were very comfortable," added Murray. "For a first-round match in a slam, it's a good start."

Playing at Roland Garros for the first time, Ito looked completely out of his depth as Murray served out the opening set in 25 minutes.

Most of his season has been spent playing hard-court challenger events and at this stage it was easy to see why.

Murray picked up where he left off at the start of the second set, breaking to love with a backhand put-away for 2-0.

But in game four his delivery malfunctioned and two double-faults preceded a wayward backhand to gift the break back.

"The second set could have been comfortable, but I obviously played a bad game," said Murray.

Ito was suddenly re-energised and began hitting winners from all parts, two love holds bringing him a 4-3 advantage.

The crowd were giving the unfancied 24-year-old their full support and in the following game he engineered three break points.

But Murray dug deep to save them all and that proved the turning point, Ito flicking a forehand long to fall 6-5 behind.

Murray served out the 48-minute second set to love and dismantled Ito's serve at the first time of asking in the third.

The next two games fell easily as a forlorn-looking Ito slipped 4-0 down, before an untimely double-fault left him a game from defeat.

A superb volley gave Ito 30-30 and brought chants of "Ito! Ito!" from the stands, but Murray confidently closed out the win.