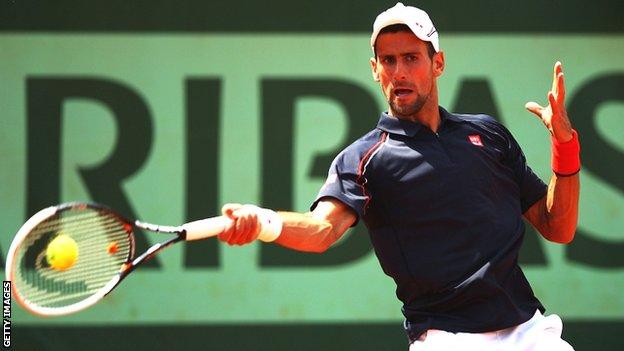 Novak Djokovic brushed aside Blaz Kavcic of Slovenia 6-0 6-4 6-4 in the second round of the French Open.

The top seed, aiming to be the first man since Rod Laver in 1969 to hold all four major trophies, will next play Nicolas Devilder or Michael Berrer.

Jo-Wilfried Tsonga and Cedrik-Marcel Stebe were a set and one game all when heavy rain ended play for the day.

Djokovic began in blistering fashion, racing through the first set in 23 minutes without dropping a game.

The second took more than twice that, with Kavcic finally getting on the board in game eight and collecting the next two games as well.

Kavcic, ranked 99th, had the crowd on his side and was going toe-to-toe with Djokovic from the baseline.

But he wasted a chance to move 4-1 lead ahead, and Djokovic punished him to level at 4-4 before striking again to seal the set.

Kavcic refused to roll over after saving a break point in game six of the third set, a stunning forehand pass gave him 0-30 in game seven.

However, Djokovic responded aggressively and the pressure told in game 10 when Kavcic put a backhand long on the fourth match point.

Federer, the 2009 champion, was in complete control against Romanian Ungur until midway through the third set.

World number 92 Ungur had two break points in the sixth game and then two set points at 5-4.

Federer saved them and then went 6-4 ahead in the tie-break that followed.

However the 16-time Grand Slam winner's immaculate timing briefly deserted him and a netted backhand gave Ungur a fourth successive point and the set.

Federer needed to save two break points in the opening game of the fourth set but soon closed out victory in two hours and 27 minutes.

"Instead of being aggressive I let him show me what he could do," the 30-year-old said of the two squandered matchpoints. "He played two beautiful shots and he played very well."

Next up for the Swiss maestro will be a third-round match against either Slovakian Martin Klizan or Frenchman Nicolas Mahut.

Seventh seed Thomas Berdych, who reached the semi-finals in 2010, hit eight aces and 42 winners to defeat Frenchman Michael Llodra 6-2 6-3 6-3 in an hour and 41 minutes.

The 26-year-old from the Czech Republic plays South African Kevin Anderson in round three, the 31st seed eliminating Horacio Zeballos of Argentina 6-3 3-6 6-3 6-0.

In the doubles event Britain's Dominic Inglot partnered Treat Conrad Huey of the Philippines to a 7-5 6-2 victory over American duo Michael Russell and Donald Young.