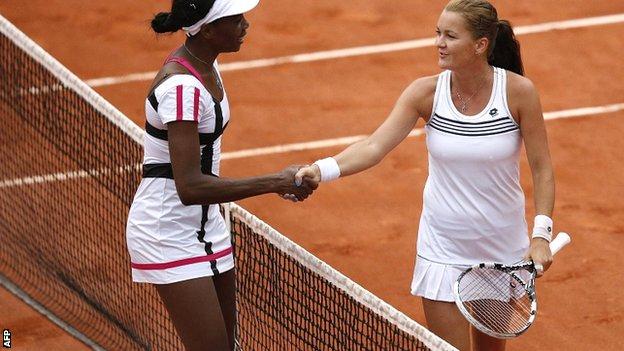 Former world number one Venus Williams followed her sister Serena out of the French Open, losing 6-2 6-3 to third seed Agnieszka Radwanska in round two.

Top seed Victoria Azarenka eased through with a 6-1 6-1 victory over Germany's Dinah Pfizenmaier.

Venus, who began the year at 134 in the world rankings after being diagnosed with Sjogren's Syndrome, a fatigue-inducing autoimmune disease, has never won the French Open. Her best effort came in 2002 when she lost in the final to her sister.

With the sisters out of the tournament, within 24 hours of each other, one wonders if the final chapter is soon to be written in their remarkable story.

Not a chance, according to Venus who, despite her loss to Radwanska and her debilitating illness, bravely talked of a positive future. She only played to make sure her ranking was high enough to reach the Olympics where, she joked, she'd do anything to get a medal including throwing the javelin.

There's little doubt they're past their dominant best but, with a big summer ahead, there also appears little chance of a retirement announcement anytime soon. They love sport too much.

She lost her opening service game and Radwanska, who has won three titles this year, secured the first set with an ace after 28 minutes.

The 23-year-old Polish player, who has yet to progress beyond the quarter-final stage in a Grand Slam event, combined outstanding fitness with some flawless strokeplay.

In the next round she will play 2009 champion Svetlana Kuznetsova, who needed a second set tie-break to overcome Yung-Jan Chan in an hour and 41 minutes.

Stosur, who lost the 2010 French Open final to Francesca Schiavone, has dropped only nine games in her first two matches this year.

The 28-year-old Australian again looked comfortable against Falconi, ranked 112, who was appearing in the second round for the first time.

Azarenka, who lost the first set and was a point away from a 5-0 deficit in the second against world number 105 Alberta Brianti in the opening round, needed only 55 minutes to dispatch Pfizenmaier, who is currently ranked 198th.

The Belarusian is seeking to become the first woman since Jennifer Capriati in 2001 to win the first two Grand Slams of the season, having won the Australian Open in January.

She lost the first game but proceeded to win the next 11 in succession against her 20-year-old opponent, who made 29 unforced errors.

In round three Azarenka will play Aleksandra Wozniak of Canada, who beat 31st seed Zheng Jie of China 6-2 6-4.

Bartoli, a semi-finalist last year, came from a break down in the second set to level at one set apiece against world number 50 Martic but never looked comfortable under threatening skies on Court Suzanne Lenglen.

Martic, 21, served an ace on her second match point to complete victory in two hours and 12 minutes, setting up a third-round meeting with 29th seed Anabel Medina Garrigues of Spain.

Cibulkova will meet Maria Jose Martinez Sanchez for a place in the last 16 after the Spaniard beat 20th seed Lucie Safarova of the Czech Republic 6-4 7-5.

Former world number one Ivanovic, 24, has failed to reach the quarter-finals at Roland Garros in the last three years.

She has a favourable-looking draw through to the last eight this time, where she could face Radwanska.