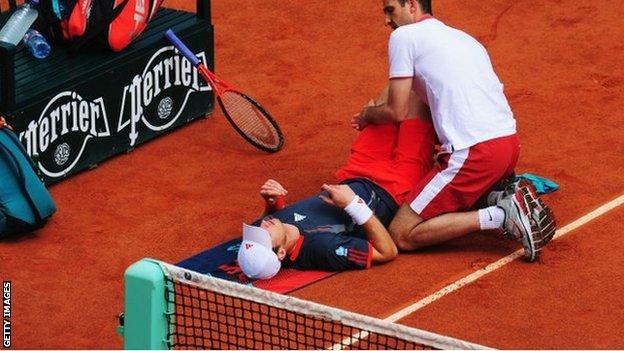 Andy Murray said he was in genuine pain during his French Open comeback against Jarkko Nieminen after Virginia Wade described him as a "drama queen".

The Briton woke up on Thursday with a back spasm that meant he could not put weight on his left leg.

He was barely able to move or serve at times early on and was seen by the trainer three times during the match, but managed to win 1-6 6-4 6-1 6-2.

Murray said: "I know how I felt on the court. I know how bad it was."

During the second round match, former Wimbledon champion Wade, commenting for Eurosport, said: "I have tremendous sympathy that his back is bad, but I have more sympathy for the other guy as, honestly, you cannot play against someone who is being a drama queen."

But world number four Murray said in the Guardian: "To me that's quite disappointing, to be honest. I know how I felt on the court. I know how bad it was.

"And then you have people like that who always have to come out and say something controversial when, really, they should be supportive or maybe ask me a question first before commenting on it.

Murray did brilliantly to turn the match around. He didn't necessarily believe he was going to win, wasn't immune to the idea of quitting in the second set and, let's be honest, he was lucky to survive.

"It is lonely [on court] but before the match I was there with the guys, talking about what I should do, and then, when I was out on the court, especially the first few sets, I wasn't looking up at anyone or engaging with anything they were saying at all, because I was just so down about how I was feeling.