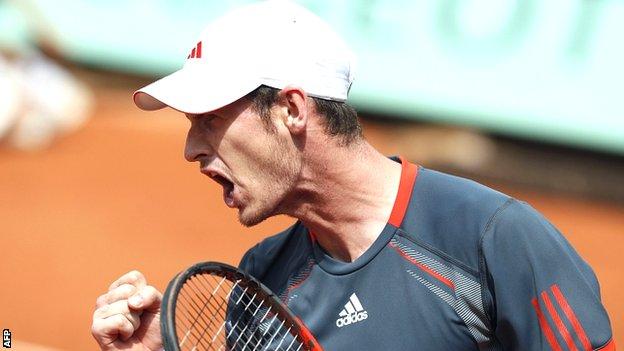 Andy Murray allayed concerns over his physical condition by dispatching Colombia's Santiago Giraldo to reach the last 16 of the French Open.

Murray, 25, struggled with a back spasm during his third-round win against Jarkko Nieminen, but there was little sign of discomfort against Giraldo.

The fourth seed saw off his 50th-ranked opponent with a superb display, winning 6-3 6-4 6-4 in two hours two minutes.

Murray will next play Richard Gasquet after he beat Tommy Haas in four sets.

He can approach that match in high spirits having negotiated the threat of Giraldo with a clinical performance.

Murray won their only previous meeting 6-1 6-2 in 74 minutes but the Scot was worked much harder on this occasion.

His response was impressive, securing one break of serve in each set while saving the only chance faced on his own delivery.

He was stepping into the court aggressively, striking the ball cleanly and moving smoothly despite doubts over his fitness.

Murray was riled by Virginia Wade's claim that he acted like a "drama queen" as he ambled through his victory over Nieminen.

Mats Wilander, meanwhile, urged him to take a more proactive approach if he is to stand a chance of lifting the title.

Murray could hardly have offered his observers a more emphatic riposte, outclassing Giraldo with a tactical masterclass.

"I'm very happy. I was just trying to make sure I got myself in the best shape possible for the match," the British number one told BBC 5 live.

"I was really surprised with the way I served because that was one of the things that was giving me trouble the other day and I hardly hit any in practice yesterday.

No drama, no controversy, no treatment, no Virginia. This was business as usual for Murray after all the drama of Thursday. A thoroughly professional performance, holding serve throughout and hitting through his forehand with impressive timing and verve. Crucially, he moved impressively in and out of the corners with no obvious discomfort. From being a couple of points away from a crushing retirement, he's now in the last 16 looking in fabulous nick.

"He [physio Andy Ireland] has helped a lot. We've done two or three treatments each day to try and make sure I get better, seen the doctor, taken all the right medication, anti-inflammatories. Those guys have made a huge, huge difference."

Murray looked calm and relaxed throughout, not once berating himself as so often has been the case.

From the opening minutes, when he chased down a drop shot to win game one, the back problem seemed under control.

Giraldo was flashing huge winners from out wide but Murray contained him and broke for 4-2 when the Colombian netted a backhand.

A love hold completed the 28-minute first set, in which Murray conceded only three points on serve, and he was similarly comfortable at the start of the second.

Giraldo netted to go down a break in game five and Murray consolidated the advantage with an incredible crosscourt forehand for 4-2.

His only moment of angst came when serving for the set, but Giraldo netted on break point and his opportunity was gone.

An 18-minute first game of the third set, including a 29-shot rally, went the way of Giraldo and suggested he was far from done.

But Murray continued to serve impeccably and after taking his third break point in game seven to lead 4-3, he served out on his second match point with a crosscourt backhand winner.

The Frenchman beat Murray in their most recent meeting - at May's Italian Open - but Murray has won all three of their Grand Slam encounters, including a five-set thriller at Roland Garros in 2010.