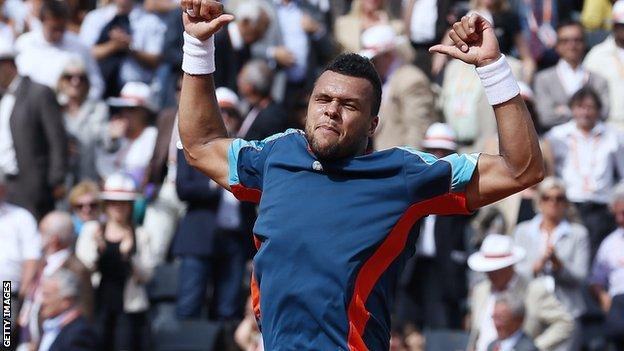 Fifth seed Jo-Wilfried Tsonga powered into the last 16 of the French Open with a straight-sets victory over Italian Fabio Fognini.

The Frenchman dropped his serve five times but came through to win 7-5 6-4 6-4 and will face Stanislas Wawrinka in the fourth round.

Berdych, had lost all his previous five-set matches at Roland Garros, will meet Juan Martin del Potro in the last 16 after the Argentine's straight-sets win over Marin Cilic.

Afterwards Berdych also revealed he would like to work with Andy Murray's coach, Ivan Lendl, in the future.

The former Wimbledon finalist said of Lendl, a Czech by birth: "It would be an honour. But it's not only just for me to say if I want him or not. But definitely if we could be together then, of course, it could be nice."

In beating Fognini, Tsonga avoided the fate that befell compatriot Gael Monfils in the second round at Roland Garros in 2010.

On that day, Fognini annoyed Monfils with his theatrics to prevail in a match that ended at dusk.

"Fabio always does that," said Tsonga. "When I walked on the court this was one of my objectives. I didn't want to fall in the trap, because then it can become very complicated."

Marcel Granollers is through to the third round after a five-set win over Malek Jaziri.