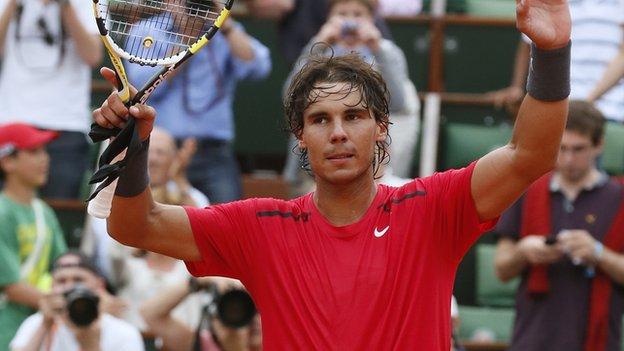 Defending champion Rafael Nadal cruised into the fourth round of the French Open with a straight sets victory over Eduardo Schwank.

The Spaniard will face Juan Monaco in the last 16.

Nadal, aiming for a record seventh French Open title, was rarely troubled as he recorded a 48th career victory at Roland Garros, a venue where he has only ever suffered one defeat.

His forehand was far too good for Schwank, particularly in the first set, but the Argentine did make a contest of it in the second and third.

Ferrer's strength on the clay suggests he could be a real contender to go far at Roland Garros, but the 30-year-old is not looking any further than the next round.

"I don't want to think about if I will win Roland Garros," he said. "I will have to play semi-final, quarter-final. For me, the most important is the next match."

After Ferrer won the first set in 20 minutes Youzhny wrote "sorry" in the clay, and the Spaniard wrapped up victory in an hour and 41 minutes.

"There was a lot of people. That's why I write 'sorry'. Because I can't show them a nice game," Youzhny explained.

"The way we played in the beginning, it was not really interesting for people."

Nicolas Almagro, seeded 12th, ensured there will be a strong Spanish presence in the last 16 after he beat Leonardo Mayer of Argentina 6-4 6-1 6-2.

He will play eighth seed Janko Tipsarevic after he overcame Julien Benneteau 6-3 7-5 6-4.

The Serb took two hours and 35 minutes to see off Benneteau, who had gone into the tournament suffering from ankle and elbow injuries.