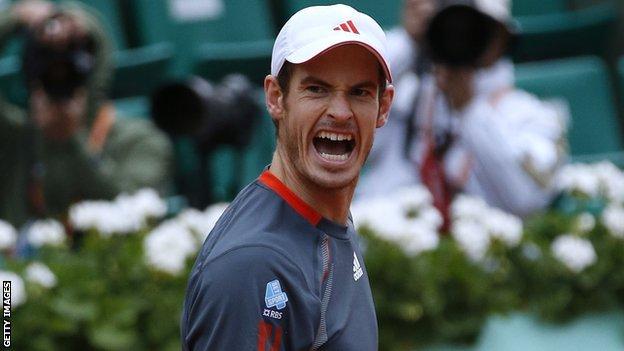 Andy Murray rallied from a dismal start to defeat Richard Gasquet and reach the quarter-finals of the French Open.

Having been taken apart by the Frenchman in the first set, Murray eventually prevailed 1-6 6-4 6-1 6-2 in front of a partisan Paris crowd.

The fourth seed, the only non-Spaniard in the bottom half of the draw, now meets David Ferrer on Wednesday.

"Apart from a grim first set, when he looked horribly nervous and concerned about his bad back, this was an outstanding performance from Murray. He preyed on Gasquet's weaknesses and broke the Frenchman down mentally. The ninth game of the second set, when he saved break points with some bold backhands, was crucial. Likewise, the tactical introduction of dynamite drop shots. Some of his tennis, particularly late in the match (with a boisterous French crowd cheering missed first serves at one stage), was up there with the best he's produced all year. Yes Gasquet crumbled, but Murray was stamping all over him."

Murray said: "I've played Davis Cup away ties but that was one of the most hostile atmospheres I've played in."

The 25-year-old added: "He started the match well, but I started to use the energy from the crowd in a positive way and turned it around and played very well the last few sets.

"I wouldn't say it got too much. It was almost like playing a football match. And I like football. It's the most fun I've had on the court in a while."

Ferrer will present Murray with a significantly sterner test than the mercurial Gasquet - the sixth seed is yet to drop a set on his way to the last eight at Roland Garros.

However, Murray's record of reaching the last five Grand Slam semi-finals looked under serious threat in the opening stages when he was left clutching his left hip as he struggled to compete with his French opponent.

Yet, on Court Phillipe Chatrier on Monday, the injury looked to have resurfaced as early as the second game of the match, as he gestured to his coaching staff, tapping the left-hand side of his lower back with his racquet and shaking his head.

"Obviously they were not ideal conditions. It's a little bit stiff, but it's much better than it was a few days ago," said Murray.

"I played some good tennis. It was a bit like when I played against Nieminen and I was moving very well at the end of the match. Hopefully the conditions will warm up a little bit."

The signs of discomfort would continue throughout, usually after he had lost a point, drawing boos from the Paris crowd.

Murray received a similarly hostile reaction when he first entered the court, smiling at the French crowd in return. But the smile was nowhere to be seen as he lost the first set in only 29 minutes, the nadir a series of tame forehands into the net to give Gasquet a second break.

The Briton improved in the second as he grew into the match, engaging the world number 20 in some long baseline rallies on a grey and windy day in the French capital.

The pair traded breaks, with the turning point in the match coming when Gasquet double-faulted at set point down.

Another double fault gave Murray an early break in the third set, a chance the Scot did not waste as he sprinted to take the set, and the fourth followed a similar pattern.

He sealed victory with a forehand winner down the line to reach his third French Open quarter-final in four years, but will know significant improvement is needed if he is to win a first Grand Slam title.

If he can overcome Ferrer, six-time French Open winner Rafael Nadal, is likely to be waiting in the semi-finals.