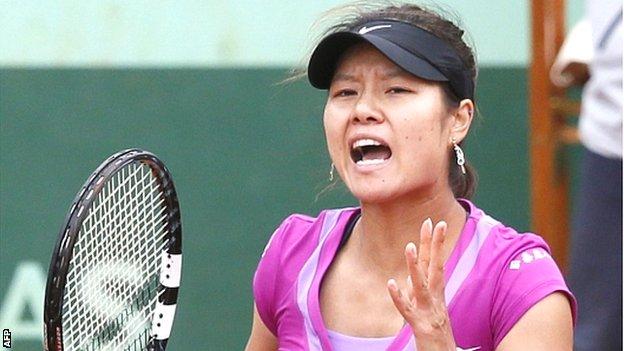 Li Na's defence of her French Open title was ended with a 3-6 6-2 6-0 defeat by world number 142 Yaroslava Shvedova in the fourth round.

Li, who beat Francesca Schiavone in the 2011 final, struggled with the cool and windy conditions as Shvedova's greater consistency proved the difference.

The Kazakh qualifier next faces Wimbledon champion Petra Kvitova after she eased past Varvara Lepchenko.

The second seed made 53 unforced errors in a match featuring 21 breaks of serve in 30 service games.

But the Russian made it through and is still on course to win a maiden French Open title, complete a career Grand Slam and supplant Victoria Azarenka as world number one.

The seventh seed from China - Asia's first Grand Slam singles champion - was bidding to become the first woman to successfully defend the Roland Garros title since Justine Henin in 2007.

But after a confident start on Court Suzanne Lenglen, the 30-year-old suffered a spectacular meltdown in the second set and never recovered.

She racked up 41 errors and was broken seven times by her 24-year-old opponent, a 2010 doubles champion at Wimbledon and the US Open.

"I will take some days off to totally forget tennis, then try to come back next week," said Li, who has not won a title since her Paris triumph 12 months ago.

"I need some time to recover - I'm not a machine. I just tried to play the ball back to the court, but I couldn't. I will find out why. But not today."

Sharapova will continue her challenge with a last-eight tie against 23rd seed Kaia Kanepi, who beat Arantxa Rus 6-1 4-6 6-0.

But the Russian will hope for a vastly improved display after labouring past Zakopalova in three hours and 11 minutes, with 12 double-faults.

"She played extremely well - she's a dangerous player," said Sharapova, who will become number one if she reaches the final.

"The conditions were difficult today, but it was a good test for me. I had the chance to finish it in two. I came out strong in the third set and it's nice to be in the quarters again."

She is joined in the last eight by Kvitova following the Czech's 6-2 6-1 victory over unseeded American Lepchenko.

Fourth seed Kvitova, who lost in round four 12 months ago, needed only an hour to see off the last singles player from the United States left in either draw.