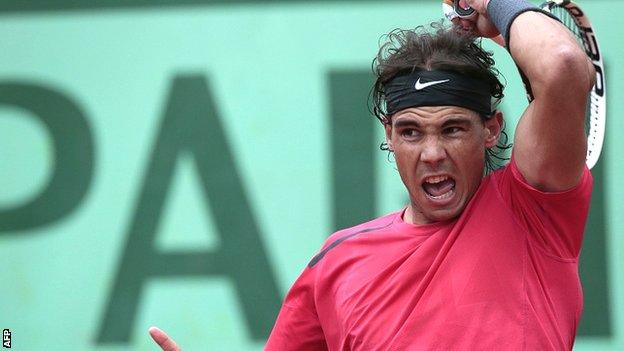 Nadal will next face fellow Spaniard Nicolas Almagro after his 6-4 6-4 6-4 victory over Janko Tipsarevic.

Juan Martin del Potro, winner of the 2009 US Open, is the only man to win a Grand Slam other than Roger Federer, Rafael Nadal and Novak Djokovic since the 2005 French Open.

"Physically, I feel good - the more I play, the better I play," said Tsonga, who aims to become first Frenchman to win a Grand Slam title since Yannick Noah's triumph at Roland Garros in 1983.

"There is more pressure on him. For me to play on clay is never easy, I did my best results on grass or hard courts.

"Clay is difficult but I'm sure I will be able to play well, and playing in front of my crowd I have nothing to lose against the world number one."

Sixth seed Ferrer, who will meet Andy Murray in the last eight, is still yet to drop a set after his 6-3 6-2 6-0 win against Marcel Granollers.

However, nobody enjoyed a smoother passage than Nadal, whose victory means three of the eight quarter-finalists are Spanish.

Monaco battled hard at the start of the first set but was ground down in game five and Nadal never looked back.

The 10-time Grand Slam champion broke again for 5-2 with an unreturnable forehand and served out with an overhead.

Monaco wasted two chances early in the second set and that was as close as he got as Nadal snapped up the 34-minute second set.

He opened up a 4-0 lead in the third and fought back from 40-15 down to break again for 5-0 before cruising over the line.