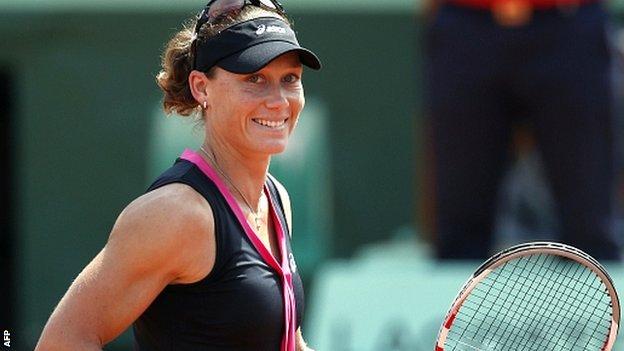 US Open champion Sam Stosur fought off Dominka Cibulkova to secure a place in the French Open semi-finals, where she will play Sara Errani of Italy.

The sixth seed won 6-4 6-1 to prevent Cibulkova causing another upset after she stunned world number one Victoria Azarenka in the previous round.

Next up for Stosur is Errani, who beat 10th seed Angelique Kerber 6-3 7-6 to reach her first Grand Slam semi.

Petra Kvitova and Maria Sharapova play their quarter-finals on Wednesday.

Stosur, who was a beaten finalist at Roland Garros in 2010, looks determined to go one better this time.

"The last few years have been very good to me here in Paris," said the Brisbane right-hander, who has now made the last four at Roland Garros in three of the last four years.

"I love playing on this court - it doesn't get much better than this. Sure [I'll be the favourite against Errani], but that doesn't mean too much.

"I'm really pleased to play the way I did and get through, but Sara will be tough."

Stosur has yet to lose a set and soon got into her stride, breaking the erratic 15th seed in game five.

The Australian survived a break point in the next game and a deep forehand to the corner helped her move 5-2 up.

However, Stosur failed to serve out the set at the first time of asking as Cibulkova raised her game.

Stosur wrapped up the second set with three breaks of serve to reach a third Roland Garros semi-final in four years.

Errani had already eliminated former champions Ana Ivanovic and Svetlana Kuznetsova before her meeting with Kerber.

The Italian proved those wins were no fluke as she recorded a first victory over a top 10 player following 28 failed attempts.

Left-hander Kerber was bidding to become the first German woman to reach the semis since Steffi Graf in 1999, but she was outplayed.

Errani broke serve in game one with an off-forehand winner and maintained that advantage to take the 38-minute first set.

The second featured six successive breaks, and eight in total, but Errani held her nerve to edge the tie-break with an unreturnable serve.