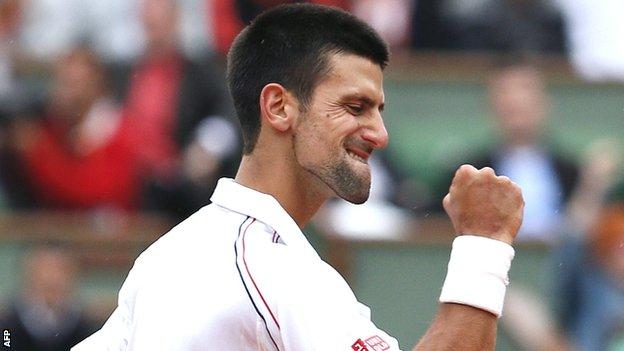 The fearless, daredevil tennis played by Djokovic, match point down, is quickly becoming one of his trademarks. The magnificent Tsonga was desperately trying to close out the match in that fourth set when Djokovic decided to hit line after line after line. Tsonga's eyes widened on the third match point but on others, Djokovic just went for it - just like in New York last year. That's six match points he's saved during this unbeaten Grand Slam run which will now celebrate its one year anniversary when he plays Federer again on semi-final Friday.

The Serb will play Roger Federer in the semi-finals after he also came through a gruelling five-set match.

He will now have a chance to repeat his 2011 semi-final victory over Djokovic, who is attempting to become only the third man to hold all four Grand Slam titles at the same time.

The last person to achieve the feat was Rod Laver in 1969 and Djokovic's hopes of doing the same only remain on course after an incredible comeback.

He and Tsonga both came through five-set contests in the last round and while Tsonga seemed jaded and nervous early on, Djokovic was alert and authoritative.

There seemed little sign of the drama to come as the 25-year-old top seed won the opening set in 21 minutes.

Tsonga belatedly kickstarted his challenge in the second set, delivering some scintillating blows to level the match.

Djokovic gestured angrily to his camp from his chair at the changeover, while Tsonga and the crowd were now firmly against him.

Tsonga recovered a break early in the third set and while his play was generating huge cheers, Djokovic successes brought shunned silence.

The Serb failed to take two break points at 5-5 and was punished in spectacular style as Tsonga broke him and served out.

Tsonga's power was unsettling Djokovic and the fifth seed had four match points late in the fourth set.

But as in the 2011 US Open final against Federer, when he also faced a match point, Djokovic hit out and it paid off.

Djokovic edged the tie-break to shatter Tsonga's resolve and he broke three times in the deciding set before roaring in celebration.

He has two days to recover before he plays Federer, who overturned a two-set deficit for the seventh time in his career.

Del Potro beat Federer in an epic US Open final in 2009 but wrist and hip injuries have severely hampered his progress.

The ninth seed chose their latest encounter to rediscover the form that helped him defeat the Swiss at Flushing Meadows.

This time, however, Del Potro became hindered by a heavily strapped left knee and Federer was able to overwhelm his opponent.

Federer's form did improve as the match progressed and he remains in contention to add to his sole French Open triumph in 2009.