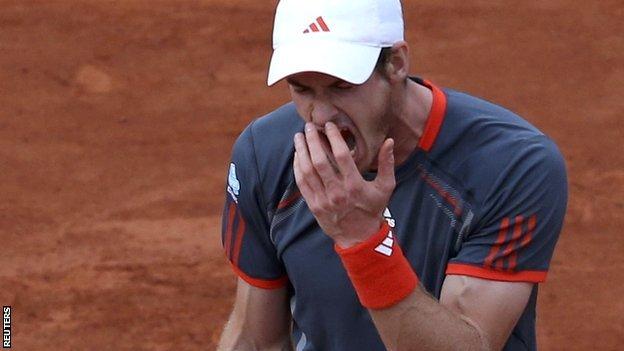 Andy Murray's quest for a first Grand Slam came to an end as he was beaten by David Ferrer in the French Open quarter-finals.

The number four ranked Scot produced too many careless errors to mount a sustained challenge and he eventually went down 6-4 6-7 (3-7) 6-3 6-2.

"The French Open is a continuing puzzle for Murray. There are simply more players who can beat him on the surface and, if he's honest, when he saw Ferrer and Rafael Nadal in his half of the draw, he suspected a title challenge was unlikely to be in 2012. He's not a member of the top five on clay and is he even in the top seven? Results and logic suggests Ferrer and Juan Martin del Potro are ahead of him, with Nicolas Almagro and Tomas Berdych pushing him hard."

Read the rest of Jonathan's blog

"He had his chances and converted them," said Murray. "He's solid and consistent and if you don't convert opportunities against him, the games become longer and the pressure builds on you."

As impressive as Ferrer was, Murray will be left to rue his 59 unforced errors. While Murray's spirit could not be questioned, too many of his forehands found the net at crucial times.

He had lost his last three meetings with Ferrer on clay, but Murray has improved on the Paris surface since the last of those in 2010 and carried more of a threat this time around.

His heavy hitting early on helped him engineer two break points in the third game but he netted on both occasions.

His failure to seize the initiative was punished as Ferrer broke the British number one's serve in the next game, during which Murray showed the first signs of discomfort from the hip and back injuries that have troubled him in previous rounds.

Ferrer saw off four more break points in holding to go 5-2 up but wobbled when serving for the set, a long forehand resulting in the Scot breaking back. However, Murray wasted that good work, losing his serve in the next game to give the Spaniard the set in 66 minutes.

The Scot twice failed to consolidate breaks of serve in the second set as Ferrer refused to buckle.

But Murray persevered and levelled the match on a tie-break after another arduous 66-minute set.

It was the first set anyone had taken off Ferrer in the tournament and, after a rain delay briefly forced the players off court, the Spaniard was the quicker to get back on track.

Murray lost his concentration and his serve after the restart, and quickly went on to lose the set.

And, despite breaking Ferrer in the first game of the fourth set, the number four seed again squandered the advantage as he was broken straight back.

Murray's failure to capitalise only served to inspire Ferrer, who closed out the match to set up an all-Spanish clash with six-time champion Nadal.