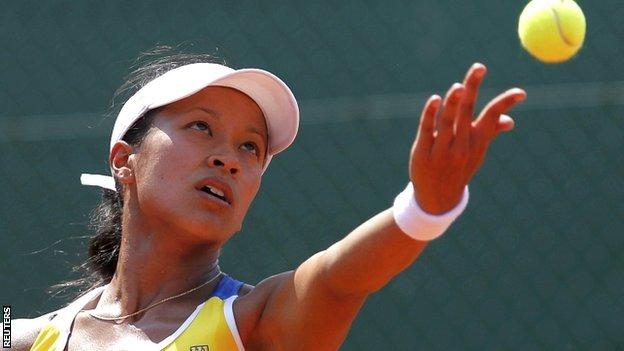 Anne Keothavong won an all-British encounter against Laura Robson at the Aegon Trophy in Nottingham.

The Londoner came through 6-4 6-3 to reach the last 16, where she will face Czech qualifier Kristyna Pliskova.

Robson, who reached the French Open first round, received treatment for a knee injury late in the first set and seemed to fade later in the match.

Keothavong broke Robson's serve to make it 3-1 in the second and the world number 81 held out to seal the win.

Britain's female players in the Top 300

Earlier in the day, Heather Watson came through a tense first-round match against Melanie Oudin 4-6 6-1 7-6 (7-5) after play had resumed from Tuesday with the Briton leading 5-4 in the third.

The 20-year-old from Guernsey failed to convert seven match points before sealing the third set tie-break 7-5, and the match ended in controversial circumstances with American Oudin furious at a line call on Watson's winning second serve.

Oudin, who defeated former world number one Jelena Jankovic at Wimbledon in 2009, refused to shake hands with the umpire and only belatedly congratulated Watson on the victory.

Watson was back on court later in the day and was trailing Su-Wei Hsieh of Taipei 1-0 when rain ended play for the day in mid-afternoon.

When the rain came Jamie Baker was defying his world ranking of 207 to lead fellow Briton James Ward, ranked 65 places higher, 6-2 2-1, while Josh Goodall was a set down 7-6 (7-2) to Russian Igor Kunitsyn.

All three matches will resume on Thursday, with play due to get under way at 11:00 BTS.