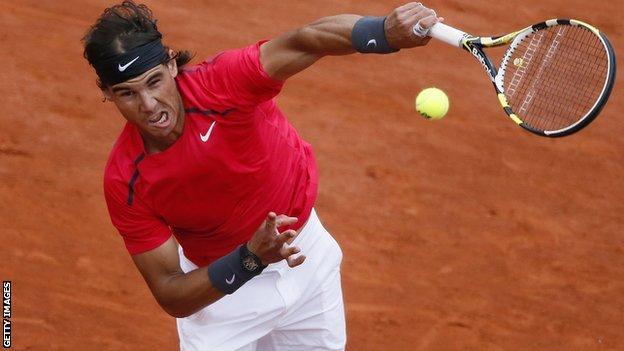 Rafael Nadal remains on course for a record seventh French Open title after powering past Nicolas Almagro in the quarter-finals at Roland Garros.

The number two seed needed a tie-break in the first set and dealt with an Almagro resurgence in the third after a one-sided second.

He will meet fellow Spaniard David Ferrer in the last four.

"I was just trying to wait for my moments," said Nadal. "He had some good moments and he was hitting the ball hard, but I had my chances, too."

Neither Nadal nor Almagro had dropped a set en route to the quarter-finals, but despite Almagro having seen off eighth seed Janko Tipsarevic in the fourth round, Nadal was still expected to enjoy a simple win, especially after his demolition of Juan Monaco in the last 16.

Yet he was not at his best in the first set, unable to force a break point until the 11th game, with the 12th seed saving and going on to force a tie-break.

It delayed the world number two only briefly, as he won the opening four points of the tie-break and took the set when Almagro sent a service return long.

His powerful groundstrokes coming to the fore, Nadal had few problems as he raced through the second set, earning the first break of the match in the fourth game.

With Nadal a game up the in third, rain forced a short delay and Almagro resumed re-energised, producing some huge shots, particularly when given the opportunity to attack high balls on his forehand side.

The 26-year-old from Murcia forced two break points in the fifth game and another in the seventh, but was unable to take any of them.

And when he double-faulted to give Nadal a second chance to break in the eighth game, the left-hander from Mallorca did not waste the opportunity to go 5-3 up.

He completed victory with an ace, and is one step closer to improving the record of six French Open crowns he shares with Bjorn Borg.

"His serve was really good today," said Almagro. "At the important moments, he served better than [he did] the rest of the match. The key of the match is I had my chances and I didn't catch it."