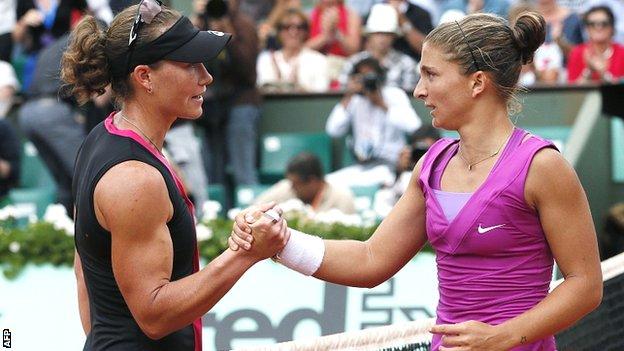 Both players had spells of domination during the match before Errani, ranked 21st, prevailed against the sixth-seeded Australian 7-5 1-6 6-3.

Errani had a 3-0 lead pegged back in a tense deciding set but held her nerve to win in two hours, four minutes and reach her maiden Grand Slam final.

She will play Maria Sharapova in Saturday's final.

Stosur had held a 5-0 head-to-head advantage over Errani going into the match, although the Italian had knocked out former Roland Garros champions Ana Ivanovic and Svetlana Kuznetsova on the way to the last four.

The were ominous signs for the Italian as she was broken in her first service game, but she shook off her early nerves to quickly get back on level terms.

Stosur possessed more power and punch to her game but that was nullified by Errani's timing and tenacity.

And, with both players finding their rhythm and range, it made for an intriguing battle.

Stosur was the first to blink and, despite saving two break points in the 11th game, she could not do so a third time as the Australian netted a volley to leave Errani to serve for the set.

Any fears that anxiety would get to the Italian proved misplaced, as Errani finished off an assured game with a forehand down the line to claim the opening set.

It was the first set Stosur had dropped in the tournament and she soon regrouped and rallied to take the second set in clinical fashion, as her weight of shot overwhelmed Errani.

Errani, though, recovered her variety and verve for the deciding set and established a 3-0 lead.

Stosur was buoyed by a rasping forehand winner down the line and fought back to level but failed to maintain her form as Errani broke her again before coolly serving out the match.