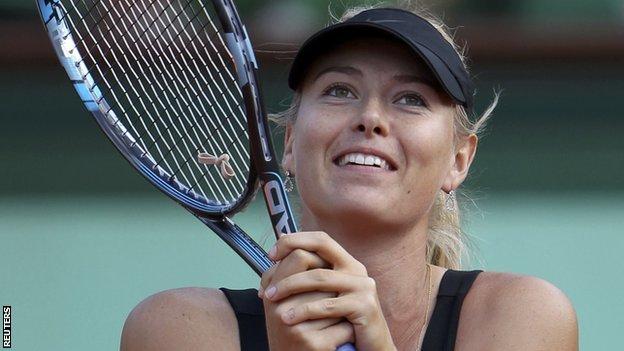 Maria Sharapova booked a place in her first French Open final and moved up to world number one by overcoming Petra Kvitova in straight sets in Paris.

Second seed Sharapova produced the more assured play to steer herself to a 6-3 6-3 victory over the fourth seed.

The result also keeps the Russian on course to achieve the career Grand Slam by winning the one major tournament which has eluded her.

The new number one, who will displace Victoria Azarenka on Monday, will be a huge favourite to beat surprise finalist Errani, especially considering the manner of her victory against left hander Kvitova.

Sharapova was contesting her third French Open semi-final and had high hopes of victory at Roland Garros having come into the tournament on the back of clay court wins in Stuttgart and Rome.

The Russian had beaten Kvitova on the way to victory in Stuttgart and, after saving break points in both her opening service games, Sharapova grew in confidence and consistency to break her rival in the fifth game.

Kvitova's power and precision had helped her beat her opponent to claim the Wimbledon title last year but Sharapova had the answer to anything the Czech could throw at her.

It's the third time I've been in a semi-final here, I've dreamed of reaching the final and finally I have that opportunity"

The blustery conditions on court Philippe Chatrier were an issue but the Russian dealt with them better.

Some heavy blows were being traded and Sharapova regularly came out on top before going on to win the first set.

Kvitova exerted more pressure on Sharapova early in the second set, although like the opener she failed to take a break point and lost her own serve in the following game to go 3-1 down.

This time around, however, the number four seed broke back to level, although any hopes of a comeback were quickly extinguished.

Sharapova was controlled and concentrated and again broke her more wayward rival before a second serve ace secured victory.