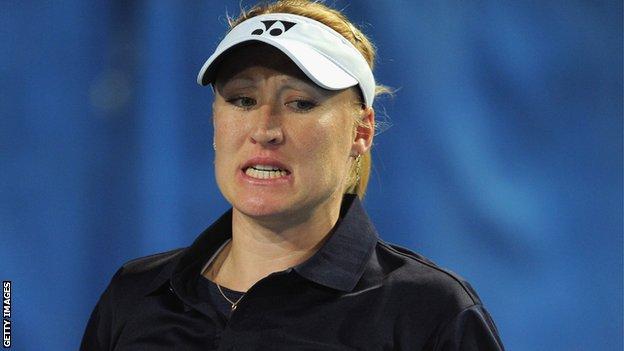 British number one Elena Baltacha is through to the quarter-finals of the Aegon Trophy in Nottingham after beating Michele Larcher de Brito.

Baltacha's second round match, against the Portuguese number one, was due to be played on Wednesday but like many others suffered from a rain delay.

There was another halt when the players were warming up on Thursday before the game was moved indoors.

"It was a really good match," said Baltacha.

"She's talented and she played very aggressively against me but I dealt with it really well. I think experience helps you against younger players like her. I just got on with it and I think I also served really well at the right times."

The Scot will now play Poland's Urszula Radwanska in the last eight.

"I'm looking forward to playing Radwanska, especially after playing her on clay a few weeks ago," added Baltacha.

"The forecast is supposed to be a bit better as well, which is good. I've always loved playing here in Nottingham and my results have shown that. I come here and straight away I feel comfortable and confident."

But the break benefited the British number two who struck back to win in three sets.