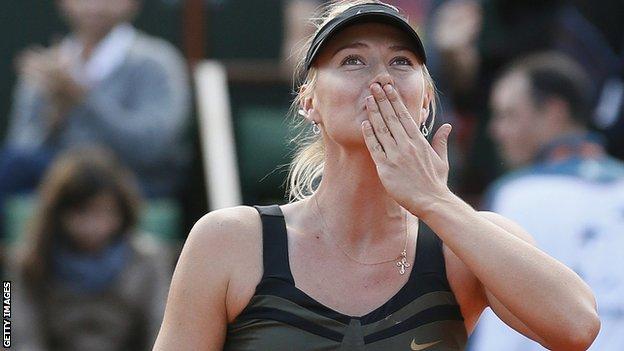 Maria Sharapova says she has "dreamed" of reaching the French Open final as she closes in on a career Grand Slam.

Sharapova beat Petra Kvitova in the last four to earn the chance of winning the one Grand Slam that has eluded her.

"It's an amazing feeling," said the Russian, who will play Italian 21st seed Sara Errani in the final.

"It's the third time I've been in a semi-final here, I've dreamed of reaching the final and finally I have that opportunity."

Maria Sharapova is looking to become the 10th woman to complete the career Grand Slam. Serena Williams was the last to achieve the feat when she won the 2003 Australian Open.

Sharapova's victory over Kvitova also moved her back to number one in the world rankings for the first time since 2008.

"I'm more than excited," she added. "It's pretty special. A few years ago after shoulder surgery I don't know what my ranking was - over 100!

"It's pretty amazing that on Monday I am going to be number one again."

Errani secured her place in Saturday's final with a win over the more powerful Samantha Stosur and Sharapova knows the Italian will be on a threat on the clay surface at Roland Garros.

"The final is always the toughest match, I've got to be ready for it," said Sharapova.

"I'll relax [on Friday] as we have a day off. I'll practice and be ready here for Saturday.

"I did watch it [Errani's victory over Stosur] and she's playing such good tennis. She's a really great clay player and it will be a real challenge. I will go out there no matter who the opponent is try to win."

She is benefitting from a change of racquet and her performance in Paris will elevate her into the top 10.

"I'm very happy about how I've played because I think I've played good matches. It's not finished, I have one match more. I have to think about that.

"I don't feel like I'm top 10 but now I will be, so it's a strange sensation. Maybe my problem always was that I couldn't believe that I could beat the strong players.

"But now I've beaten three in a row. I'm in the final of a Grand Slam. So I have to maybe try to think a bit different."