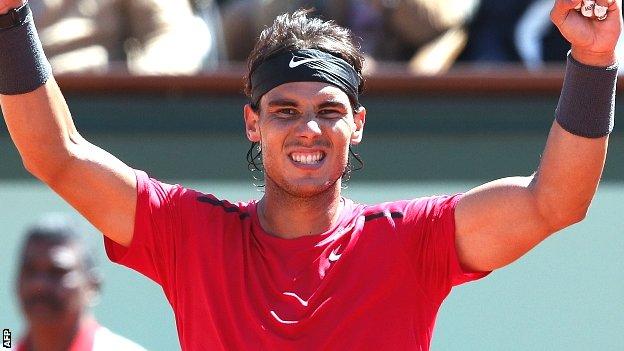 Nadal continued the onslaught either side of a break for rain and hit some sparkling shots to move two sets up.

Ferrer started well but his real involvement in the contest lasted only three-and-a-half games. This was a thrashing and Nadal was awesome. From the moment he saved break points in the fourth, embarking on a run of 18 out of 19 points, there was only ever going to be one winner. He defended superbly, draining belief from his always willing opponent, and used his whiplash forehand to spin winners whenever the opportunity arose. A demolition of the fourth-best clay courter in the world proves why he's the favourite to win a record seventh title on Sunday.

The ruthlessness continued as Nadal broke for a third time in the third set to win in one hour and 46 minutes. He will meet Novak Djokovic in the final.

"Today was my best match of the tournament, against the best player I've faced here so far," said Nadal, who plays Djokovic in Sunday's showpiece after the world number one beat Roger Federer 6-4 7-5 6-3.

"It is a very important victory for me - to win with this result against one of the best players of moment, and the world.

"I don't believe in perfection, it doesn't exist in my opinion, you can play always better. But I'm very happy with the way I'm playing."

It will be Nadal's fifth consecutive Grand Slam final and the victory extended his phenomenal record at Roland Garros to 51 wins from 52 matches, his only defeat against Robin Soderling in 2009.

Having beaten one record he shared with the legendary Bjorn Borg - the number of French Open finals - the 26-year-old now has the chance to eclipse him again by becoming the first player in the Open era to win the title seven times.

The French crowd arrived for the 13:00 local time start at a leisurely pace and Nadal was also a shade slower out of the blocks than usual as the bustling Ferrer comfortably held his first two service games, then created two break point opportunities in the fourth.

Nadal, utilising his customary quick feet to unleash his whirling forehand whenever possible, duly responded by forcing some Ferrer errors and breaking to love in the next.

The wind was blowing clay particles off the court and Nadal soon began to do the same to Ferrer, breaking to love again and winning 18 out of 20 points in taking the first set.

Nadal even managed to win a point whilst sitting on the clay having slipped, which led to a break in the third game of the second set.

He broke again to lead 4-1 and the only halt to his march into the final came from the elements as heavy rain resulted in a 55-minute delay on the Court Philippe Chatrier.

The rain gave way to clear skies and Nadal unveiled more classic strokes from his repertoire, a dexterous overhead backhand smash swiftly followed by a running forehand down the line as the second set was sealed in 36 minutes.

Ferrer had often outclassed British number one Andy Murray in their quarter-final but could find no answer to the supreme nature of Nadal's strokeplay.

The 30-year-old's only win in 13 previous matches on clay against Nadal came in their first meeting, a 2004 encounter in Stuttgart.

His chances of improving that statistic receded further when Nadal quickly moved 2-0 ahead in the third set.

The six-time champion proved his backhand was just as fearsome as he recorded two more breaks and wrapped up his 39th victory in 43 matches this year.

"He plays better than me all the time," said Ferrer. "It's difficult to say something, no? He was better, and he had a very good match."