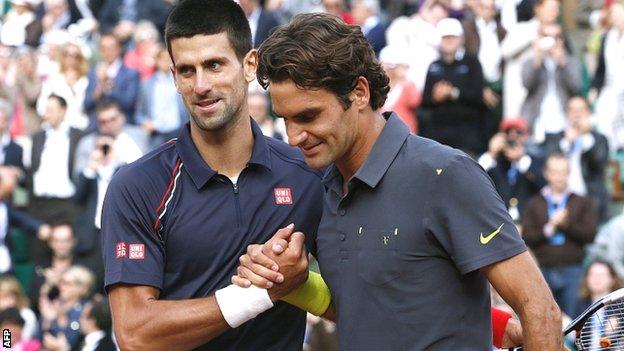 Novak Djokovic outclassed Roger Federer to reach the French Open final and maintain his bid to hold all four Grand Slam titles at the same time.

The world number one came from a break down to win the first set before overturning a 3-0 deficit, preventing Federer serving out to take the second.

In his first Paris final on Sunday, Djokovic faces Rafael Nadal, who has won 11 of their 13 matches on clay.

"Perhaps this is Federer in decline? On today's evidence he hasn't got the consistency to live with Djokovic and Nadal. He can do it in best-of-three set tournaments but that's the difference for me. I don't like saying this because he is a legend and I hope he continues playing long into the future."

The world's two best players will both be attempting records, Nadal a seventh Roland Garros title and Djokovic seeking to become only the third player, and the first since Rod Laver in 1969, to hold all the major trophies at once.

Djokovic and Federer's 10th Grand Slam meeting could not sustain expectations as the Serbian levelled the overall score to 5-5.

Federer won in four sets when the pair met in the semi-finals at Roland Garros last year, but his many followers will have been alarmed with his failure to compete for long periods in this encounter.

Federer captured the first break with a sweeping forehand but Djokovic, who needed to save four match points to overcome Jo-Wilfried Tsonga in the quarter-finals, broke back immediately.

As Federer tried to combat Djokovic's athleticism with some bold winners, his precision deserted him and the opening set slipped away.

Having prevailed in an epic 36-stroke rally. Federer then landed a smash to break in the first game of the second set, before sending an ace down the middle for his first love hold in the next.

It appeared there was to be no response from Djokovic, who netted then sent a forehand long to drop serve again, but a more expansive approach saw him swiftly break Federer and the set was soon all square.

The fluctuations continued as a backhand down the line created a break point for Federer, which he duly accepted.

But when serving to level the match he was broken for a third time and Djokovic soon moved ahead for the first time in the set.

Federer has not won a Grand Slam since January 2010 and when he sent a forehand long to concede the set, he would no doubt have been aware that Djokovic had never lost from two sets up, a statistic that was not about to change.

A single break in the sixth game of the third set was enough for Djokovic to complete victory as Federer succumbed to his sixth successive defeat against a number one ranked player.

"I was actually feeling well in the second set so that one hurts the most to lose. In the third I wasn't able to put a good game together and with a two sets lead it's not the same match anymore and Novak goes for broke.

"The Olympics is still two months away, Wimbledon is two weeks away so there is still time, but semi-finals is a very good result for any tennis player.

"I've got to change things for grass anyway and I'm looking forward to that. It's been a difficult clay court season, I wasn't in the best shape physically and maybe I did feel that coming down the stretch."

Assessing the challenge awaiting him against Nadal, Djokovic said: "I know I have to be playing consistently well on a very high level to win a best-of-five against Nadal here.

"It's the ultimate challenge. But I believe today was my best match of 2012 Roland Garros for me. I raised my game when I needed to. That's something that gives me confidence before the final.

"When you come back from double break down against a player like Federer, it's a success, a great achievement, but I can't allow myself to have that many ups and downs, especially in the next match."