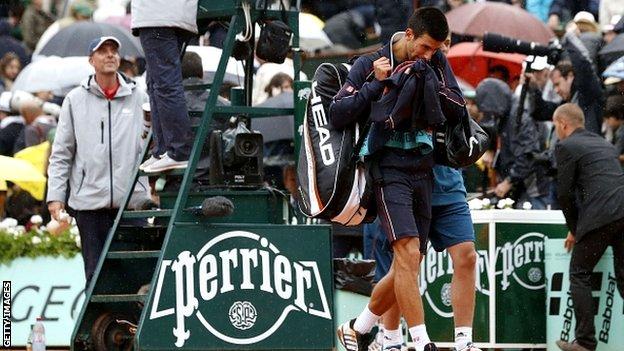 The French Open final between Rafael Nadal and Novak Djokovic will resume on Monday after play was suspended because of persistent rain at Roland Garros.

World number one Djokovic was in the ascendancy, however, having won eight games in a row to secure the third set and an early break in the fourth.

Play is scheduled to restart at 12:00 BST on Monday.

It means the wait to discover which one of these tennis greats will etch their name into the history books must continue, as a match billed as the dream final evolved into a contest every bit as gripping as the epic finals between the pair at this year's Australian Open and the 2011 US Open.

Nadal, aiming to break a record he shares with Bjorn Borg by winning a seventh title at Roland Garros, looked to be hurtling towards victory as he grabbed a two-set lead and a break advantage in the third set.

But Djokovic, seeking to become the first man since Rod Laver in 1969 to win a fourth straight major, tapped into his seemingly infinite reserves of willpower to drag himself back into contention before the weather disrupted proceedings.

Six unforced errors in the opening three games from the usually faultless Djokovic racquet suggested history was weighing heavily on the Serb's shoulders.

There were flashes of wizardry from Nadal as he burst into a 3-0 lead but, just as umbrellas were mushrooming around Philippe Chatrier, the man who had beaten Nadal in the three previous major finals was back on song and soon level at 3-3 thanks to a series of crushing forehand winners.

The last time the French Open did not finish on a Sunday was back in 1973, when Ilie Nastase's victory over Niki Pilic ended on the Tuesday.

Djokovic's serve needed fine tuning however - only 48% of his first serves were on target during the opening set - and a double fault on break point in the seventh game gave the 10-time Grand Slam champion the upper hand, with the Spaniard wrapping up the set in under an hour.

A double fault in the opening game of the second set gifted Nadal an early break but, once again, Djokovic fought back, an irretrievable backhand winner followed by a deft lob bringing the set back on serve at 2-2.

The initiative was once again with Nadal, who had enjoyed a fortnight of brilliance in the French capital, as the 26-year-old broke either side of a 35-minute rain delay for a two-set lead.

Djokovic's hopes seemed as bleak as the Parisian weather, the Serb facing the daunting task of becoming the first man to overhaul a two-set deficit against Nadal on clay.

But the 25-year-old, who had saved four match points in his quarter-final against Jo-Wilfried Tsonga, won six games on the trot to clinch the third set.

And his winning streak continued as he broke in the opening game of the fourth before play was suspended with Nadal, beaten on the Parisian clay only once since his debut in 2005, rattled.

Whether the match will conclude on Monday, however, is open for debate as rain is forecast throughout the day.