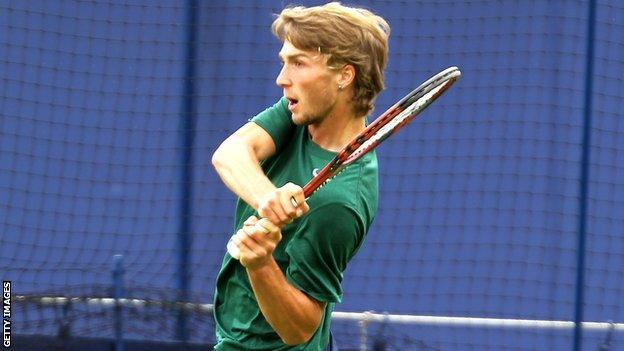 Britain's Liam Broady says he is relishing the chance to test himself at the highest level when he makes his main tour debut at Queen's Club on Tuesday.

It's a lot more physical in the men's game that it is in the juniors. The serve's a lot more important and it requires a great deal more focus

The 18-year-old plays Gilles Muller in round one of the Aegon Championships after receiving a wildcard.

"It will be a fantastic insight into the top of the men's game. I've been looking forward to it all year."

Broady was one of four Britons scheduled to start on Monday, but rain meant the day was abandoned at 17:00 BST without a ball being struck.

He will face 14 seed Muller in the second match on Court One, where play starts at 11:00 on Tuesday.

Having played a combination of Grand Slam tournaments with Futures and Challenger events this season, the left-hander will now get his first taste of the ATP World Tour.

"Over the last year or so I've been playing a lot of the Junior Slams and the juniors quite often get the chance to hit with the pros to warm them up before their matches," said Broady.

"I've hit with Andy Murray, Novak Djokovic, Roger Federer and Rafael Nadal - the top four. It's fantastic to see what it's like but it's one of the toughest transitions a tennis player can make.

"It's a very long process. It's very hard in the Futures. I've seen a lot of great players get stuck in them. It's one of the toughest things to do and you've got to get out of them as quickly as possible."

Broady is not expected to beat world number 53 Muller but he added: "I've heard a fair bit and know he did quite well on the grass courts last year.

"I've been looking at a few of his matches. I've got my tactics. I'll go out and stay as relaxed and loose as I can because I've got nothing to lose."

Ward, meanwhile, takes on big-serving Anderson hoping to recapture the form that saw him make a surprise run to the semi-finals 12 months ago.

On Monday the points from that performance dropped off his ranking - meaning he slipped from 142nd in the world to 171st - but he hopes to make significant strides in the coming months.

"It's the same this year and that's what I'm working towards. Once you establish yourself around 80, 90, 100 you can start working towards being top 50 on a regular basis.

"Hopefully I can do what I did last year and maybe a bit better. I played well here and have done on grass for the last couple of years, but you need to be consistent and that's what I'm working on."