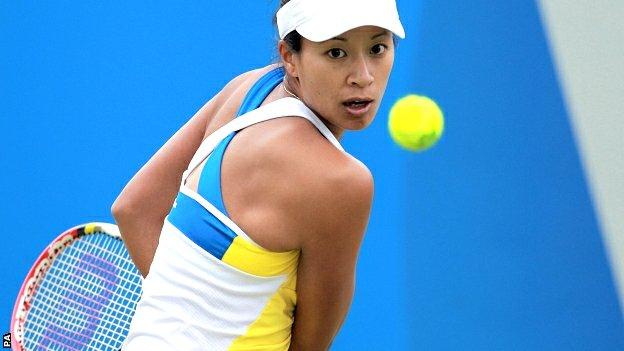 Her win was bettered by Tara Moore, however, as the British number seven made up 267 ranking places to beat 11th seed Iveta Benesova 6-1 6-2.

The 19-year-old had won only four of her previous 11 matches this year.

Moore, ranked 320th in the world, capitalised on an out-of-sorts performance by the Czech, the world number 53, and converted all four break points offered to her.

Keothavong, whose run to the semi-finals in Nottingham last week returned her to the top of the domestic game for the first time since 2009, had already defeated Paszek in Doha earlier in the season.

The 28-year-old Londoner repeated the success as she emerged victorious from a see-sawing second set of a match that lasted an hour and 33 minutes.

British number four Laura Robson made shorter work of American Grace Min, winning in a little over 52 minutes to set up a second-round meeting with 12th-seeded New Zealander Marina Erakovic.

But Heather Watson had to battle back from the loss of the second set to eventually see off Argertina's Paula Ormaechea 6-4 3-6 6-3 in two hours nine minutes.

The Guernsey 20-year-old will play Baltacha in the next round if the Scot can beat Taiwan's Kai-Chen Chang. But Baltacha trailed 4-6 3-2 when their match was suspended because of darkness on Tuesday.

But Samantha Murray could not add to the string of upsets as world number 63 Urszula Radwanska proved too strong, grinding out a 6-4 6-4 win over the 24-year-old.

American Melanie Oudin, a quarter-finalist at the 2009 US Open, ensured that 10th seed Sorana Cirstea joined Benesova and Paszek in making earlier-than-expected-exits with a 3-6 6-3 6-2 win against the Romanian.