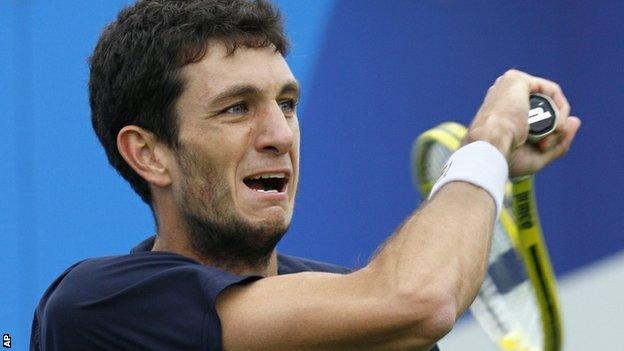 James Ward saw his grass-court campaign get off to a disappointing start as he was beaten by ninth seed Kevin Anderson in round one of the Aegon Championships at Queen's Club.

The British number two, who enjoyed a surprise run to the semi-finals last year, went down 4-6 6-3 6-4 to the big-serving South African.

Ward could not join Andy Murray in the second round, but Jamie Baker did after he beat fellow Briton Oliver Golding 7-6 (7-1) 6-3.

Liam Broady, who lost in the boy's final at Wimbledon last year, was overpowered however by powerful Luxembourger Gilles Muller, who sent down 11 aces in a 6-2 6-1 win.

Two-time champion Murray, the top seed, received a first-round bye and will begin his title defence against Nicolas Mahut after the Frenchman overcame Guillermo Garcia-Lopez.

"Ward played very well in the first set - he made a high percentage of first serves, but he couldn't keep the pressure up. In the first round on grass, it's a chance to take a big scalp. I thought he would sneak through but he didn't play well on the big points. He needs more variety and confidence ahead of Wimbledon."

Baker is up to a career-high ranking of 203rd and his reward for victory over US Open junior champion Golding is a meeting with second seed Jo-Wilfried Tsonga.

But the tournament is over for Ward and his attention now turns to the Aegon International in Eastbourne followed by Wimbledon, where he has a wildcard.

"I played a good match," said the Londoner. "I didn't do many things wrong but he has a great serve and when you fall behind it's tough to get back in.

"I had a couple of chances but didn't take them and he did take his. You don't get too many and the half-chances you do get, you have to take."

"it wasn't one of the best draws you could get but it happens. You have just got to deal with it and I didn't do too badly. You know, I thought I played all right."

Ward overcame Stanislas Wawrinka and Sam Querrey on his way to the last four 12 months ago, and he made a composed start to this year's campaign, matching the 6ft 8ins Anderson with some heavy serves and fluent groundstrokes on an unseasonably cold Centre Court.

At 4-4, Ward attacked and, after Anderson missed two forehands to concede the break, the Londoner consolidated to seal a 32-minute first set.

However, Ward could not build on such impressive work in the second and after slipping 3-1 behind, failed to exploit three break points in the next game.

He could not claw back the difference and a double-fault helped Anderson register break in game three of the decider.

Ward could not make any inroads on the Anderson serve thereafter and his exit was confirmed with a weak forehand into the net on match point.

Four-time champion Lleyton Hewitt also failed to come up with an answer to a powerful service game as Ivo Karlovic sent him out of the competition in straight sets with a 6-3 6-2 win.

Hewitt, on the way back from a lay-off for toe surgery that has caused his world ranking to drift to 205th, will take his place in the main draw at Wimbledon alongside Ward as one of the event's wildcards.