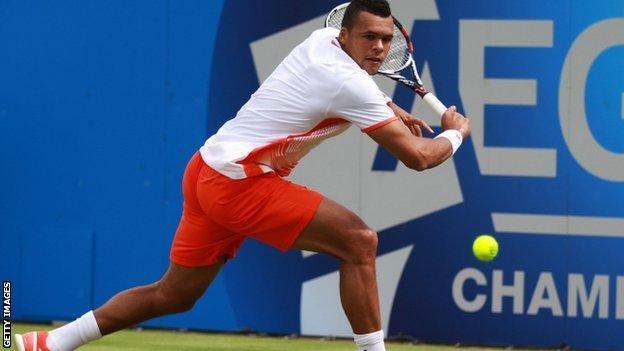 The second seed jarred his finger after slipping in the the third set.

"I think it's serious," said Tsonga. "I'll have a scan but it sounds bad. I felt like I broke or strained it."

Tsonga, a semi-finalist at Wimbledon last year, was far from his best even before injury, although he did improve considerably in the second set, twice breaking the Croatian's serve to level the match.

The Frenchman then injured his little finger in the sixth game of the deciding set and, although he survived a break point at 5-5, he surrendered in the tie-break - hitting long to give Dodig victory.

"It's only a finger but it's tough," added Tsonga, who had his hand placed in an ice-bag during his post-match press conference.

"At the moment I don't know what [the injury is], but I will stay positive and I will see."

Dodig will play 2010 champion Sam Querrey in the quarter-finals after the American beat Julien Beneteau 6-3 3-6 6-3.

The wind was changing all the time. It was complicated to serve sometimes.

There was another surprise exit on day four as world number 72 Grigor Dimitrov beat Murray's conqueror Nicolas Mahut 7-6 (7-3) 6-4 in one hour and 36 minutes to reach the last eight.

"It's definitely one of my best matches so far," said the 21-year-old. "The wind was changing all the time. It was very complicated to serve sometimes."

Dimitrov will play Kevin Anderson, who beat Feliciano Lopez 7-6 (12-10) 7-6 (9-7) on Court One, and the ninth seed will have to be at his best if Dimitrov replicates the form that disposed of Mahut.

The Bulgarian's powerful groundstrokes proved too much for Mahut as Dimitrov clinched the first set tie-break with a deft volley, before breaking the Frenchman in the fifth game of the second set and comfortably holding his next two service games to love.

Play was abandoned for the day at 18:30 BST because of heavy rain, with Taiwan's Lu Yen-Hsun leading third seed Janko Tipsarevic 6-3, 1-2.

In the doubles, Jamie Murray and Marcos Baghdatis bowed out after a 6-3 7-6 (7-5) second-round defeat by fifth seeds Mahesh Bhupathi and Rohan Bopanna.

There was better news for Britons Ross Hutchins and Colin Fleming, who beat Belgian duo Steve Darcis and Oliver Rochus 6-2 6-2.