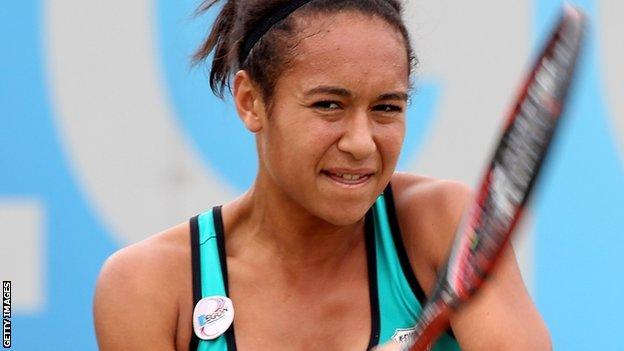 Heather Watson, the last remaining Briton, is out of the Aegon Classic, beaten 6-3 4-6 6-1 by Roberta Vinci.

The 20-year-old had two break points in the first set but failed to take either, while her Italian opponent converted two out of three.

Watson responded well and battled back to take a tight second set despite winning just one point more than Vinci.

But Vinci, ranked 20 in the world, then made light work of the third set to progress to the quarter-finals.

"It was a tough one today," said Watson. "Conditions were quite windy but Roberta played really well. She's obviously top 20 for a reason."

Watson had better news, however, when she learned she had made it into the main draw of Wimbledon on merit.

The Guernsey-born player was assured of her place earlier in the week when she was granted one of 16 wildcards to the event.

But three withdrawals mean Watson's world ranking of 111 is now enough to earn her a spot, meaning another wildcard will be made available.

Andrea Petkovic of Germany has pulled out with an ankle injury, while Agnes Szavay of Hungary (back) and Estonia's Kaia Kanepi (foot) were also forced out.

They have been replaced by Bojana Jovanovski of Serbia, Lesia Tsurenko of Ukraine and Watson.

British number three Watson will be back on court on Friday after her doubles match with Laura Robson was suspended because of rain, with the British pair trailing 6-2 0-1 against Timea Babos and Su-Wei Hsieh.