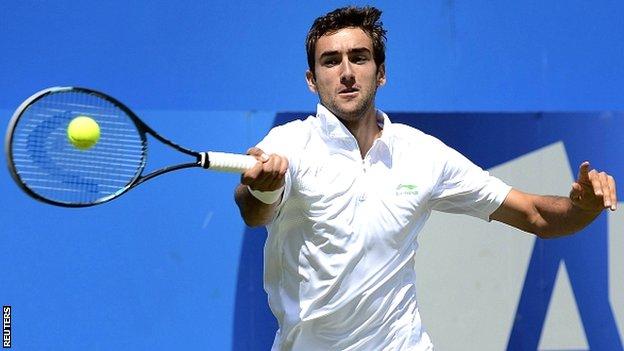 Marin Cilic overcame Sam Querrey at a windy Queen's Club to set up an Aegon Championships final against David Nalbandian on Sunday.

Croatian sixth seed Cilic battled past 2010 champion Querrey 6-3 3-6 6-3 and will play 10th seed Nalbandian after he ended the run of Grigor Dimitrov.

Nalbandian won 6-4 6-4 against the 21-year-old Bulgarian to reach his first grass-court final since Wimbledon 2002.

You can't see it on TV but the wind out there was a joke. All four players did remarkably well. In the first match, I felt Cilic held his nerve better at the right times.

In the second semi-final, Nalbandian was brilliant. Dimitrov was going for his shots but he couldn't make enough of them in these conditions. Nalbandian knew the right balls to go for - drop shots, serve and volley. It was a great performance.

The final is going to be a very good match. Nalbandian showed us variety but Cilic was also very solid and has big weapons. I think Cilic might come through. They're both going to be dangerous at Wimbledon. Nalbandian is not seeded - he'll be a nasty floater - and Cilic has a good shot.

"It was a tricky match but I'm happy to win and feel good," he told BBC Sport.

"The wind made it very tough and I don't think it was a good match. We both made a lot of mistakes.

"This week hasn't been easy - a lot of rain, delayed matches. You have to be fit to play at this level, I'm here fighting all the time."

Nalbandian and Cilic have met on five occasions, the Argentine winning four of them, but none has been on grass.

He showed glimpses of his best form against Dimitrov and coped better with the blustery conditions.

Breaks were twice exchanged before Nalbandian moved ahead again in game seven and he soon wrapped up the opening set.

Dimitrov rallied from 3-1 down in the second to lead 4-3, but Nalbandian volleyed his way to 5-4 before serving out the match.

The weather was even more troublesome during the first match on Centre Court, but Cilic dealt with it well to prevail.

"It was really windy, especially when you toss the ball as high as me and Sam," said 6ft 6in Cilic.

"I found it tough to control my serve - you just try to do the best you can and take the opportunities you have.

"It would mean a lot to win the title, especially before Wimbledon. I've played here a lot and it feels really good to make the final."

Cilic struggled to land his first serve during the opening stages because of of the wind, but Querrey failed to take advantage.

The American had nine break points in a 20-minute third game, but he wasted them all as Cilic moved 2-1 ahead.

Querrey was punished when Cilic broke in game eight and then served out the first set to love.

Breaks were exchanged at the start of the second before Querrey seized the initiative to move 5-3 ahead levelling the match with an ace.

After a double-fault let Cilic make the first move in set three, a poor forehand in game seven saw the advantage relinquished.

But Querrey's decision to play a sliced drop shot from the backcourt backfired as Cilic struck again before completing the win.