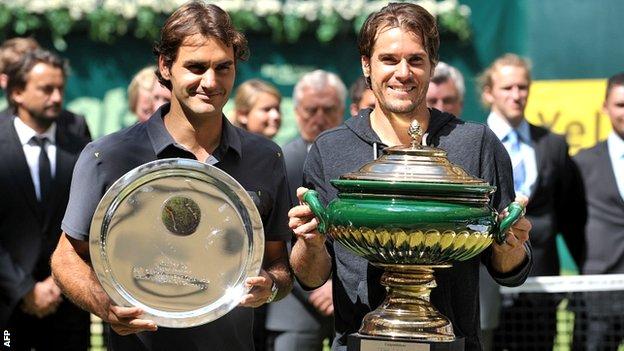 "If someone had said before that I was going to beat Roger Federer, probably the best player of all time, I would have thought they were mad," he said.

Haas had lost his previous nine meetings with Federer over a 10-year period.

He added: "This has been one of the best weeks of my career but I reckon I won't really appreciate what's happened until this evening."

left Federer as the overwhelming favourite to lift a sixth title at the Wimbledon warm-up event.

But Haas, the oldest player in the singles draw, overcame the Swiss for the first time since 2002 to secure his 13th career title.

He recovered from dropping serve in game one by edging the first-set tie-break and then secured the decisive break in game nine of the second.

Haas served out the match to win Halle for the first time since 2009, when he went on to reach the semi-finals of Wimbledon.

He will hope for a similar run when he competes at the All England Club on a wildcard this year.

"I'm very impressed with how he played today. Tommy deserved to win," said Federer, who had a been chasing his fifth title of the season and 75th overall.

"I should never have lost the first set, so that hurt. He got momentum after that."