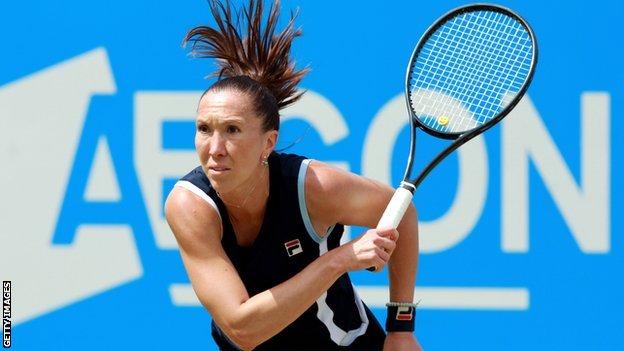 The final has been held over until Monday at 11:00 BST because of the bad weather in Edgbaston.

Melanie Oudin, ranked 208 in the world, won her only previous meeting with Jelena Jankovic at Wimbledon in 2009.

Jankovic, winner at Birmingham in 2007, said: "It's been a really difficult day at the office but a good one. You spend 12 hours at the site just watching the rain out of the window. Even when it stopped, I still saw the rain."

Oudin, who has reached her first WTA tour final, said: "I'm pretty happy about this week. I've been 30 in the world before so it's not like I can't get back there again.

Discussing the challenge of facing former world number one Jankovic, the 20-year-old American said: "It's definitely good I've played her before. But she's a great player, she has been in the top 10 for a long time.

"I know recently she hasn't been doing that well but she's a former number one. She knows how to play good tennis."

Tickets valid for Monday, 11 June, Friday, 15 June or Saturday, 16 June - days that were severely affected by the weather - will gain free entry to the final.