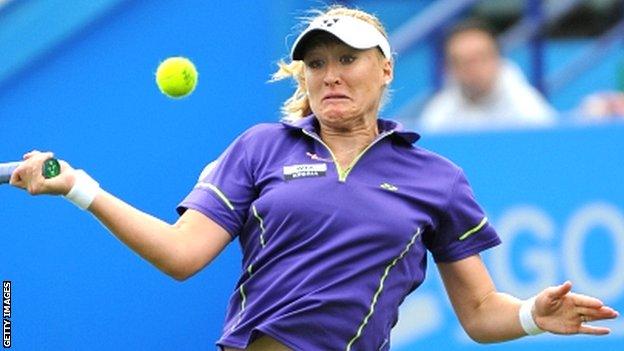 British number two Elena Baltacha was forced to pull out of her qualifying match against Laura Robson at the Aegon International with a neck injury.

The 28-year-old remains confident of playing doubles alongside Anne Keothavong at the Eastbourne event.

"My neck was really sore during practice and in the end I had no choice but to pull out of the match."

Baltacha added: "It's a tough one to take because I've had some bad luck with injuries over the last few weeks.

"But the good news is that it doesn't seem to be too serious and hopefully I can still play doubles with Anne later in the week."

Baltacha beat Kai-Chen Chang in the first round of qualifying on Saturday, while Robson saw off Daneika Borthwick on Sunday.

The 18-year-old will play top seed Varvara Lepchenko or Bojana Jovanovski on Monday for a place in the main draw.

Fellow Briton Jade Windley, ranked 543rd in the world, upset 77th-ranked third seed Stephanie Foretz Gacon 4-6 7-6 (7-2) 6-1 and will face Greta Arn of Hungary in the final round of qualifying.

Johanna Konta, recently awarded British citizenship, is to face Elena Vesnina in the second qualifying round.

Keothavong and Watson received wildcards into the main draw, where Agnieszka Radwanska, Petra Kvitova and Caroline Wozniacki are the top three seeds.

In the men's draw, James Ward, Jamie Baker and American former world number one Andy Roddick were handed wildcards, but Josh Goodall lost 6-3 6-7 (7-9) 7-6 (7-4) to top seed Matthew Ebden in the final round of qualifying.

Jamie Murray is partnered in the doubles by Eric Butorac, with Colin Fleming and Ross Hutchins the third seeds.

Dominic Inglot and Jonathan Marray, and Ken Skupski and Jamie Delgado have been given wildcards.