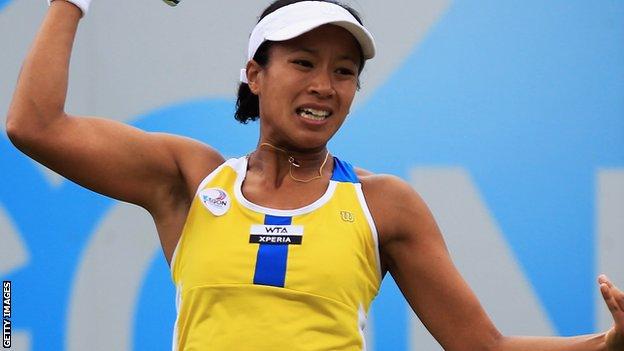 Anne Keothavong lost 6-2 6-3 to Daniela Hantuchova in the first round of the Aegon International in Eastbourne.

The British number one was broken four times as she struggled against the number eight seed.

In the men's event, Jamie Baker made it through to the second round with a 6-1 6-4 win over American Donald Young.

Arn will now play British number three Heather Watson in the first round proper on Wednesday.

Robson was due to meet another Briton Elena Baltacha in the third round of qualifying but the Scot withdrew with a neck injury.

Instead she made light work of world number 103 Jovanovski, winning in 71 minutes to advance to the main draw.

The 18-year-old, who has been handed a wildcard for Wimbledon, was never broken throughout the match and won 22 of 28 points on her first serve.

Keothavong, 28, will now hope British number two Baltacha is fit enough to take her place alongside her in the doubles.

In the men's draw Baker, ranked a career high 200 in the world, will now face either Germany's Philipp Kohlschreiber or Go Soeda of Japan, who meet on Wednesday.

"That's my best win in terms of ranking, no doubt about that," said Baker after his victory over 50th-ranked Young.

The news was not so good for James Ward who was beaten 4-6 6-1 6-4 by Australian Marinko Matosevic.

Robson enjoyed more success, following her singles win over Jovanovski, by reaching the second round of the ladies doubles with Heather Watson.

There was also success in the men's doubles as Jamie Delgado and Ken Skupski combined to beat Mariusz Fyrstenberg and Marcin Matkowski 6-2 6-4.