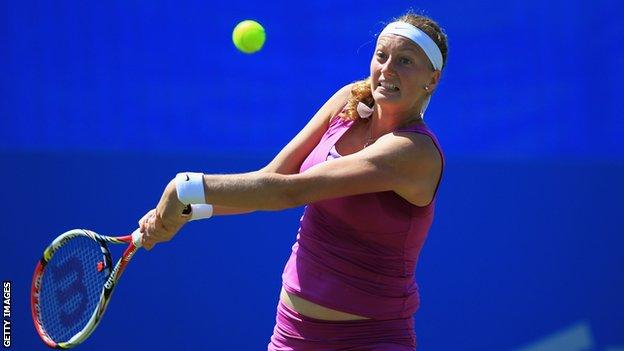 Wimbledon champion Petra Kvitova's preparations for her title defence were hit by a surprise defeat as the top three women's seeds lost at Eastbourne.

Kvitova lost 7-5 6-4 to Russia's Ekaterina Makarova in the first round.

Caroline Wozniacki, seeded third, was knocked out by Christina McHale 6-1 6-7 (7-9) 6-4 but there were victories for British pair Laura Robson and Heather Watson at the Aegon International.

Teenager Robson saw off Spain's Maria Jose Martinez Sanchez 3-6 6-2 6-2, while Watson went through with a 6-3 6-4 win over Greta Arn of Hungary.

Kvitova's conqueror Makarova is the next opponent for 18-year-old Robson, who produced one of the best wins of her career in beating world no 49 Sanchez.

Robson said: "I was really happy with how I played in the second and third set.

"You know, I didn't necessarily play badly in the first set. It's just that I wasn't patient enough in the rally, and I let her [Sanchez] dictate points."

Asked if it was a good day for the British contenders, Watson said: "Yeah, brilliant day. I didn't see any of Laura's match, but she did really well to come through. That's a tough first-round win.

"I'm also very pleased with myself to get through there."

After her defeat, Kvitova admitted she needed to improve ahead of the start of Wimbledon on 25 June.

"It's not good preparation but I have more days for getting ready for Wimbledon," she said. "I have to work hard now to improve my game."

World number seven Wozniacki was watched by her boyfriend Rory McIlroy as she lost to American McHale despite saving three match points.

Wozniacki said: "I would have liked to have won that match, but at least I got some points in. I'm just trying to work on a few things before Wimbledon."

Meanwhile, 2011 champion Marion Bartoli enjoyed a smooth passage into the second round, the French player easing past Sorana Cirstea 6-2 6-2.

In the first round, Andy Roddick claimed his first win in seven matches as fellow American Sam Querrey retired with an injury when trailing 5-2.

Britain's Jamie Murray teamed up again with American Eric Butorac, his early-career partner, in the men's doubles, but they were beaten 7-6 (12-10) 6-2 by the Italian pair Daniele Bracciali and Andreas Seppi.