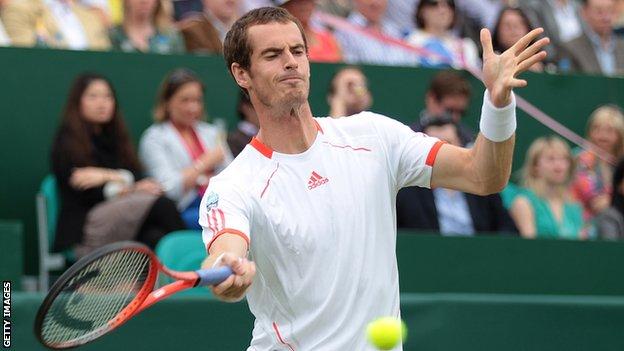 Andy Murray feels he is still in good shape ahead of Wimbledon despite suffering another warm-up defeat.

"I moved much better than I did a week ago at Queen's. I wasn't slipping around as much, so that's going to be important for Wimbledon."

He was also beaten by Nicholas Mahut in the second round of the Aegon Championships at Queen's.

But the Briton, named as the fourth seed by the All England Club, is unworried by his recent results ahead of the 126th Wimbledon Championships, which run from Monday 25 June to Sunday 8 July.

"I'm hitting the ball very well, practice has been good the last few days and I've got some good quality matches in," added the world number four.

"I get another one here and then go back over to Wimbledon to spend two or three days there before the tournament starts.

"You want to do better every year you play there. It's going to be tough.

"There's a lot of tough, tough players around, a lot of dangerous floaters as well, big servers with big games that are very tough early on, especially on the grass courts. So it's going to be challenging.

"My fitness is fine. You slip and slide on the grass fairly often but I'll be fine on Monday."

Murray continues his preparations when he faces world number one, and defending SW19 champion, Novak Djokovic at the Boodles on Thursday 14:30 BST.