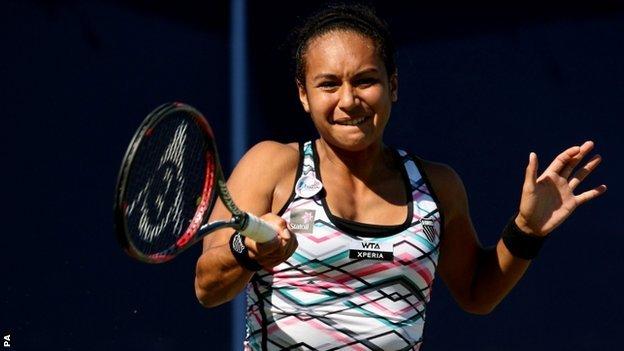 British duo Heather Watson and Laura Robson suffered exits in the second round of the Aegon International.

Robson, 18, who claimed a surprise win over 49th-ranked Maria Jose Martinez Sanchez on Tuesday, was defeated 6-4 7-5 by Ekaterina Makarova of Russia.

Baker, who was the only remaining Briton in the singles draw by the time he went on court in Eastbourne, was broken twice as the German won the first set.

He came out strong in the second set and converted one of two break points to take the match into a decider.

Kohlschreiber, ranked 171 places higher than Baker, raced to a 4-0 lead in the third set, converting two break points to secure his place in the quarter-finals.

The German is joined in the last eight by American Andy Roddick who beat Jeremy Chardy 6-2 7-5 in just 84 minutes.

Roddick, who made it through the first round after his opponent Sam Querrey was forced to withdraw through injury, had seven break points in the opening set, eventually converting two.

The second set was a closer affair, although the seventh seed did have five more break points, which he failed to to take advantage of.

In the other ladies matches both the eight and ninth seeds are out, Daniela Hantuchova (8) beaten 6-4 3-6 6-1 by Tamira Paszek and Petra Cetkovska lost 6-1 1-6 6-2 to Klara Zakopalova.

There were mixed fortunes for the Britons in the doubles draw with Jamie Delgado and Ken Skupski beating Pablo Andujar and Albert Ramos 6-3 6-0 but Dominic Inglot and Jonathan Marray were beaten 6-2 4-6 11-9 by Matthew Ebden and Donald Young.

In the last match on court at Eastbourne Colin Fleming and Ross Hutchins, who are seeded 13th at Wimbledon, beat Israeli pair Jonathan Erlich and Andy Ram 7-2 (7-2) 7-6 (7-2).