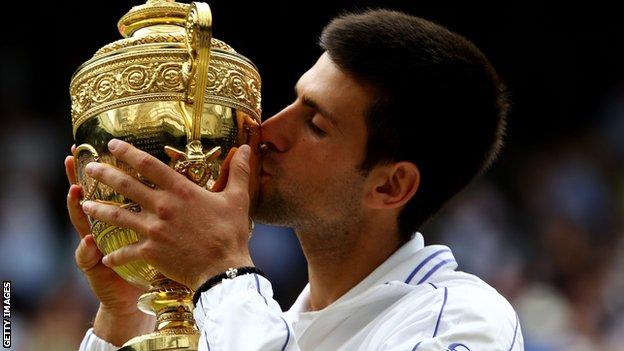 World number one Novak Djokovic says he feels in prime condition heading into the defence of his title at Wimbledon starting next week.

In his first match since losing to Rafael Nadal in the French Open final - and his only grass-court warm-up - Djokovic beat Andy Murray 6-4 6-4 at the Boodles exhibition event.

It's my life, I'm in love with this sport and have dedicated everything to tennis

"I'm happy with the way things are going," said the Serbian.

"I'm striking the the ball well, I feel good on grass and I'll be ready."

"I like to focus on every year separately but I'm satisfied with how I'm feeling," he added.

Djokovic took a week off after Roland Garros and began practising on grass last Saturday.

In the rain-interrupted final against Nadal he looked some way short of the form that saw him win each of the previous three Grand Slam events.

That sequence started with a memorable triumph at the All England Club 12 months ago, and the Serbian insists he still has plenty more to give.

"It's my life, I'm in love with this sport and have dedicated everything to tennis," said Djokovic, 25.

"I won Wimbledon last year and became number one in the world, something I always dreamed of achieving. I can't complain about my results and I've had a fantastic career.

"But I still feel that there are plenty of years to come. I have a lot of motivation left and every day when I wake up I want to improve, get better on the court and win more tournaments."

"The result here does not really matter too much here," added the five-time major winner. "We came here to have some good match practice before Wimbledon.

"Playing with Andy was great for both of us but for me it was even more important because I didn't play in any tournament in the opening week of the grass-court season.

"It takes a little bit of time to adjust because clay is the slowest surface in tennis, whereas grass is the fastest.

"It's different types of movement, but I have a couple more days to get ready.

"I got a very good match today, I've had a lot of practice since Saturday and I'll try to play as many points as I can in the next couple of days before starting at Wimbledon."